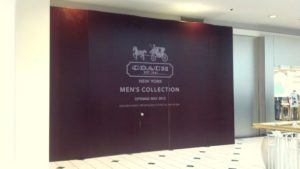 A number of new stores have opened or are planning to open soon at The Fashion Centre at Pentagon City.

A Bose store is now on the mall’s Metro level (ground floor). According to a mall press release, the location is a Bose “Personal Audio Store,” described as “the newest concept retail store featuring select products for the on-the-go customer who wants Bose to be a part of their active lifestyles.”

The Limited has moved into a new storefront in the mall. “The newly enlarged store will continue to offer the exclusive array of The Limited brand clothing and accessories and will introduce eloquii, their new line of full-figure fashion for plus sized women,” the press release says.

Coach is launching its first “dual concept” side-by-side men’s and women’s store in the nation. Set to open in “early June” on the mall’s second level, the expanded store will “feature a full line of Coach, America’s preeminent designer brand for both men and women.” 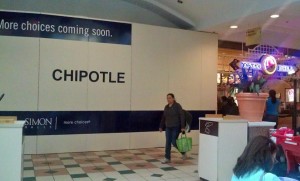 Tumi is scheduled to open a new showcase store on the mall’s second level. The travel and business accessory maker hopes to open on June 14.

Chioptle is set to open in the food court at some point during “the week of June 14.” The Mexican restaurant will be located next to a Taco Bell restaurant.

Finally, a Microsoft Store is expected to open at some point later this year. A rep says the store will be “opening soon” — but declined to elaborate. Microsoft currently has 20 retail stores in the United States.

“These incredibly successful retailers enhance the powerful and exciting offerings at The Fashion Centre at Pentagon City,” mall marketing director Todd Jerscheid said in a statement. “We’re extremely pleased to welcome their brands and unique fashion forward designs to our center.”