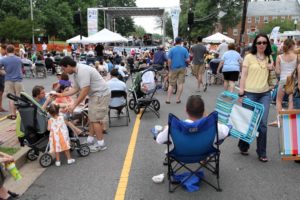 (Updated at 2:05 p.m.) The 17th annual Columbia Pike Blues Festival will be held this weekend.

The Blues Fest will feature performances from local and nationally-known blues musicians. There will also be numerous food, drink and craft vendors; kid’s activities; a raffle; and booths set up by local community groups.

Thousands are expected to attend the event, which will be held from 1:00 to 8:00 p.m. on Saturday, June 16, on S. Walter Reed Drive near the intersection with Columbia Pike. Weather for the day is expected to be mostly sunny, with a high of 80 degrees.

Among the blues artists scheduled to perform are: