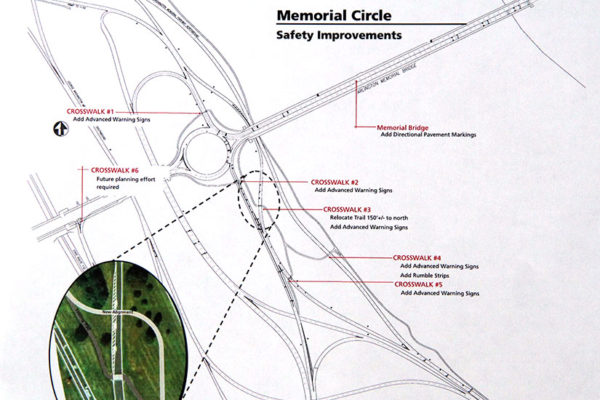 The first of several planned safety improvements along the GW Parkway will be made today (Friday).

This morning, the National Park Service is expected to starting installing the first of 46 signs (including 9 pedestrian warning signs and numerous trail and route guidance signs) that will be placed near five crosswalks around Memorial Circle. The signs, along with planned directional pavement markings, rumble strips and a trail crossing relocation, are all steps being taken in response to numerous accidents between cars, pedestrians and bicyclists near Memorial Circle.

At a press conference Thursday afternoon, officials said the changes, though simple and relatively inexpensive, will help improve the safety of all parkway users.

“We believe these improvements will increase the awareness of the dangers of crossing a very busy parkway for all travelers, whether it be on foot, bicycle or motor vehicle,” said Capt. Scott Fear of the U.S. Park Police. “Our officers have handled many, many crashes related to this area, and we continue to look for ways to improve the safety of the park’s visitors and travelers. The steps being taken should held decrease the crashes and educate the public of the surroundings and challenges they may face as they visit the park.”

“We’re going to see a major reduction in accidents,” promised Rep. Jim Moran, at the press conference. “This is going to affect thousands of people on a daily basis. It’s the right thing to do, it doesn’t interfere with anyone, and it makes everyone feel more safe and secure.”

The changes are all expected to be complete by the end of October. The Park Service, meanwhile, says it will explore more dramatic, long-term changes that could be made to improve safety, including creating a traffic island in the middle of the northbound lanes of the GW Parkway.

Fear said Park Police are considering stepping up speed enforcement along the parkway, but no final decision has been reached yet. 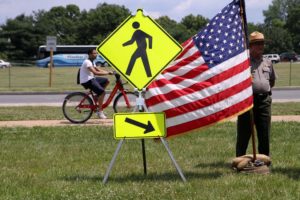 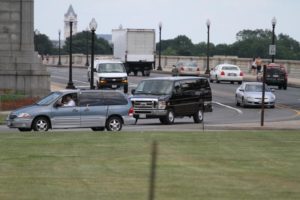 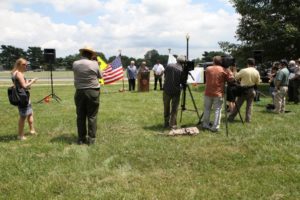 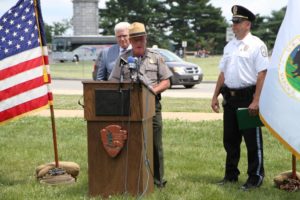 McLean, Virginia – The National Park Service (NPS), United States Park Police and Congressman Jim Moran (D-VA) have agreed to begin addressing safety concerns as soon as tomorrow, Friday, June 15 in order to help improve safety conditions between motorists, bikers and pedestrians in the vicinity of the west end of Memorial Bridge, Memorial Circle and the pedestrian/biker trail that crosses the northbound lanes of the George Washington Memorial Parkway (GWMP).

The GWMP commissioned the Federal Highway Administration’s (FHA) Eastern Lands Highway Division to conduct a study regarding all safety issues in this area.   The FHA’s final audit was completed last week, thus allowing the NPS to take action beginning tomorrow.  That action will involve the placement of the first 46 signs warning motorists, bikers and pedestrians. The safety items recommended include:

The signs and painted signage are the first actions to be undertaken.  The NPS will have long-term items to consider including creating an island in the middle of the northbound lanes.  This will require compliance with environmental laws which will take more time.

“This is just the beginning of what we’re planning,” said Jon G. James, Acting Superintendent of the GWMP.   “There are short-term goals and longer-term goals that may take a few years to complete, but we are committed to accomplishing them.”

“The United States Park Police fully support the NPS’ improvements and believe these improvements will help increase the safety and the safety goals we are all trying to achieve,” added Captain Scott Fear, Western District Commander for the U.S. Park Police.

“These improvements wouldn’t be happening without the advocacy of local cyclists, runners and drivers bringing attention to what are dangerous crossing areas along the Parkway.   Commuters and those simply using the trails for exercise and enjoyment shouldn’t fear for their safety on a daily basis.  I want to thank the Park Service and the Park Police for working with my office to make this happen, and look forward to their speedy completion.”