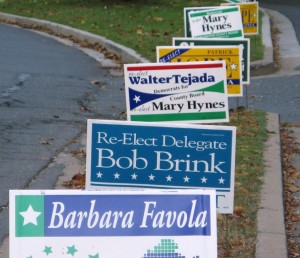 The long process surrounding updating the county’s sign ordinance trudges on, as the County Board approved additional public hearings at last night’s meeting.

The unanimous approval set one public hearing on the Zoning Ordinance changes for July 9, and another for July 24. Both will be in the third-floor Board Room at 2100 Clarendon Blvd.

One issue residents consistently raised at public workshops last year, and continue to contact the county about, is that of signs in the public right away — on road medians and the like. Currently, only two types of signs are allowed in the right of way — political and directional real estate signs. The real estate signs are allowed on weekends, typically to identify open houses, and political signs can remain for 31 days prior to an election.

A proposed amendment would allow non-commercial signs to remain in areas like medians for seven days at a time. Examples of those signs include lost pets, civic association meetings and community fundraisers. Directional commercial signs would be allowed on weekends for events in residential districts, such as yard sales and open houses. The signs would all have to be within half a mile of the events they are advertising. 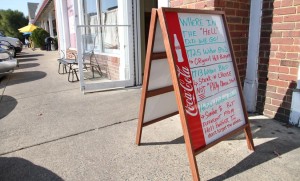 A number of residents have suggested permitting volunteers to enforce the signs ordinance, and to remove non-compliant signs in the public right of way. Although citizen enforcement originally offered some appeal due to citizens being able to respond more quickly to offending signs, county staff says complications arose upon further examination. For instance, injuries or property damage during sign removal could be a liability to the county, and citizens may make mistakes if they don’t have an extensive knowledge of the zoning ordinance. Thus, that idea was scrapped.

Other proposed changes to the ordinance came up at a county work session in January, and include standards for lighted signs as well as provisions that would reduce the number of sign issues that need to go before the County Board for approval.

Work on the revised sign regulations has been ongoing since December 2010, and has involved “intensive” participation from County Commissions, residents and business owners.

“This proposed overhaul of our sign regulations will make it easier for everyone — both residents and business owners — to understand and follow the rules,” said Arlington County Board Chair Mary Hynes. “The proposed regulations also set the stage for businesses to put up creative signs that enliven our commercial areas and meet residents’ expectations.”