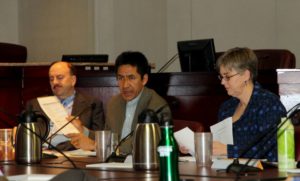 Now that A-frame signs and branded sidewalk cafe umbrellas have been approved for use in Arlington, the County Board is moving on to other, slightly less pressing signage issues as it works to revamp the county’s sign ordinance.

Last week Board members held a work session with County Manager Barbara Donnellan to give input on revisions they’d like to see to the proposal before the final version is inked. The latest draft was devised based on staff input and information gathered at public sessions last year.

One proposed change that all the Board members indicated support for was reducing the number of signs issues that require the Board’s attention. The hope is that by making the ordinance more clear and specific, fewer cases will need special approval.

The county also hopes to include clear standards for illuminated signs. Before that topic can be adequately addressed, Donnellan said a lighting consultant must be hired. Suggestions for illuminated sign restrictions include requiring businesses to turn off lit signs between 10:00 p.m. and 6:00 a.m. Currently, there aren’t guidelines for lit signs in the ordinance because such signs weren’t widespread the last time the Board made revisions. Of particular concern are some of the signs on high rises in Rosslyn, such as on the Northrop Grumman building.

“It starts to look like a commercial district with major marketing when you come across the bridge,” said Board Member Jay Fisette. “I really don’t want to see that proliferate.”

Another topic garnering attention is the issue of allowing commercial signs on the so-called public right of way, such as medians. Right now, only political signs and real estate signs can be put up in these areas. The board splintered on this issue, suggesting solutions ranging from eliminating commercial signs on medians altogether, to imposing fees or permits for such a practice.

The Board voiced approval for listing specific times for when a sign can be put out and must be brought in. Along with that came the idea to revise how far away a sign may be placed from its advertised event. The proposal currently suggests half a mile, but the Board members prefer a quarter mile.

“We are the smallest county in the nation, only 26 square miles,” said Board Member Walter Tejada. “Half a mile is a lot of space.”

Donnellan and staff members will incorporate the Board’s suggestions into a new draft of the ordinance, and additional public meetings will be scheduled in the spring to discuss the nearly finished proposal. The goal for submitting a final revised ordinance and getting it approved is July.

“We certainly have an awful lot of work ahead of us,” Donnellan said.