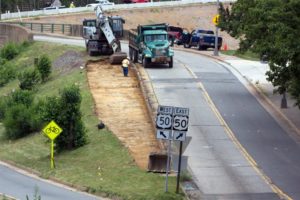 Drivers coming to and going from Courthouse on eastbound Route 50 will have to find another route later this summer. VDOT is planning to demolish the busy Courthouse Road bridge as part of the ongoing Route 50/Courthouse Road interchange project.

VDOT spokeswoman Jennifer McCord says the agency is currently planning on closing and tearing down the bridge either in late August or early September. She said the exact timing of the demolition is contingent on some other work, including the completion of new ramps to and from westbound Route 50 and Courthouse Road.

Once the closure is in place, eastbound Route 50 drivers will be directed to the next exit — Rhodes Street — and detour signs will point them back to Courthouse Road. McCord said engineers are still working on a detour for those trying to get on eastbound Route 50 from the Courthouse area.

A new Courthouse Road bridge is expected to be complete by Spring 2013, McCord said.

Another interchange project-related closure is planned for Monday. Workers are planning to close Fairfax Drive, which runs parallel to Route 50, from N. Taft Street to N. Scott Street. The closure is expected to remain in place until project completion in fall 2013.