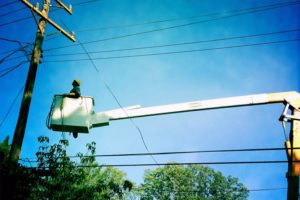 (Updated at 12:55 p.m.) Dominion, Comcast and Verizon are all working to restore service to thousands of Arlington customers still affected by Friday night’s storm.

As of 9:30 a.m. on Monday, 27,586 Dominion customers were still without power, down from 59,000 at noon on Saturday. The company says it has 4,200 employees and contractors working to restore power to customers in all affected areas, but notes that the huge scale of the damage is making restoration a multi-day process.

“Many poles and cross arms need to be replaced, and other infrastructure needs to be rebuilt,” Dominion said in a press release.

Verizon says it’s working “around the clock” to restore phone, internet and TV service. According to spokesman Harry J. Mitchell:

As with most services in the immediate aftermath of the storms — a situation faced by more than a million residences and businesses throughout the Washington metropolitan area — Verizon has been making every effort to assess damages to its facilities and immediately had crews working to get services back online. However, due to extensive commercial power outages across the entire region, our crews have had to deal with a number of technical and mechanical challenges, in addition to storm damage such as downed poles and trees on our wires.

A power issue in one of our Arlington facilities has created several issues that we’re currently working through, including difficulty some callers are having when dialing 911 in Fairfax and Prince William counties. These counties’ 911 centers now are receiving most calls, and we continue to work diligently to restore full calling to them.

We’re working late hours — often around the clock — and bringing in additional technicians from other parts of our service area to assist in bringing service back as quickly as we possibly can. We appreciate customers’ continued patience as we work to restore services in the wake of one of the worst storms in recent memory.

Comcast, meanwhile, is also facing significant service issues in Arlington in the wake of the storm. Last night many Twitter users reported that their Comcast TV and internet service had gone out, despite it working earlier in the day. According to Comcast spokeswoman Aimee N. Metrick:

At this time it appears most issues are directly related to commercial power outages, and for the vast majority of people, service should be restored as power comes back on to their homes. However, given the severity of the winds and rain that arose from this storm, we are also seeing some more extensive damage caused by falling trees, poles and more that will take longer to repair.

We are working closely with state and local emergency personnel and power companies, and have employees working across the footprint to assess and repair damage in impacted areas once provided clearance that it’s safe to do so. We appreciate our customers’ patience and understanding, and will continue to work until service has been restored for all.

With temperatures again expected to climb into the 90s, Arlington County’s libraries and community centers are open today as cooling centers for those without power. Among the centers that will be open are:

Arlington’s libraries — including Central, Aurora Hills, Glencarlyn, Shirlington, Westover — are scheduled to be open from 10:00 a.m. to 9:00 p.m. today. Yesterday Central Library and Shirlington Branch Library stayed open until 11:00 p.m. to accommodate those who lost power. According to the library blog, some 600 people were crammed into Central Library yesterday afternoon. The fire department also set up a temporary spray park at Central Library to help kids cool off.

The Cherrydale and Columbia Pike libraries are closed today due to lack of power. Also closed is the Lubber Run Community Center, the Long Branch Nature Center, some schools and some summer camps. See a full list of county closures here.

Dogma Bakery in Shirlington (2772 S. Arlington Mill Drive) is remaining open until 9:00 tonight and welcoming pets and owners who need a cool place at which to hang out. Owner Sheila Raebel — whose own house is without power — says she has set up chairs and tables after finding out that other cooling centers weren’t necessarily welcoming pets.

“We had people who were asking about it,” she said. “We found out the county… doesn’t have a place for people with their pets to come when it’s really hot. There are a lot of dogs who are older and a lot of cats who can’t live in a place where it’s 85 degrees”

The store’s Lee Highway location is currently closed due to lack of power.