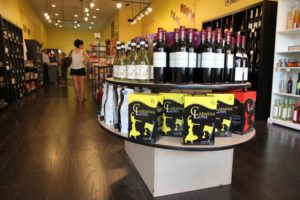 Located at 2727 Wilson Blvd, in the old Shoefly space, Grateful Red will carry (the store is still building its inventory) 500-600 bottles of wine, primarily from lesser-known independent producers, including local Virginia wineries. The store also offers beer, gourmet snacks and cheeses, and gifts.

While Screwtop will continue to operate its small retail wine shop, owner Wendy Buckley says she opened Grateful Red in order to offer more variety to customers. Many of the wines at the store can’t be found elsewhere in the immediate area, she said.

“When someone comes here, they won’t see a lot of wines they see in grocery stores,” she said.

Buckley said she’s happy to have hired some of the former staffers from Best Cellars, the Clarendon wine store that closed last year. She said the closing of Best Cellars in Clarendon wasn’t due to a lack of business. Instead, Buckley suggested, the store was doing well, but closed due to financial problems with the parent company.

Store General Manager Amanda Weaver-Page, who formerly managed the Best Cellars location in Dupont Circle, will be offering wine classes at the store, including “wine 101” and classes that focus on specific wine-growing regions.

Buckley noted that the store is pet friendly, takes pride in its sense of humor. Gifts on sale include funny t-shirts, bedazzled flasks, and an ice cube tray that makes ice in the shape of the Titanic. Although the staff is knowledgeable about wine, Buckley says they “don’t take themselves too seriously.”

Future plans for the store include adding the capability to fill beer growlers, and launching a wine basket delivery service for the D.C. metro area.