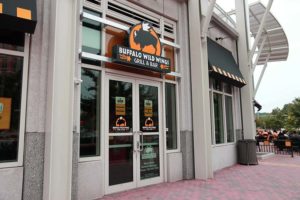 Passers-by may notice a lot of activity at the site right now, because new employees are going through training this week. But the sports themed restaurant won’t open to the public until Monday, July 16, after a ribbon cutting ceremony at 10:30 a.m.

Regional manager Don Rizzie said based in part on the success of the Buffalo Wild Wings in Crystal City, the decision was made to expand in Arlington.

Rizzie said the Ballston location is expected to be a top five store within the company. The Crystal City location, which has been open for about a year and a half, came in third in sales last year for all Buffalo Wild Wings restaurants across the country. It’s anticipated that the one in Ballston will perform as well, if not better.

“You’re not going to be able to beat the lunches we do around here,” said Rizzie.

Although the Ballston area is quickly accruing sports bar style restaurants, such as the recently opened Greene Turtle, Rizzie doesn’t think competition will be a problem. He said there are things that set Buffalo Wild Wings apart from the competition, specifically the high energy employees who put an emphasis on customer service.

“What really makes Buffalo Wild Wings is our people. That’s why we’re so selective about hiring,” Rizzie said. “Anybody can have signature sauces and put up TVs and show all the sporting events, but what we have is the energy.”

The restaurant has outdoor seating for 75 people. There will be some TVs inside the establishment that face out toward the patio for those who want to keep up with the games while getting some fresh air.

Rizzie points out that even though the chain is known for its wings, there is a full menu available for anyone who wants something a little different. There will be a variety of lunch specials on weekdays.

As part of the opening festivities, next week the restaurant will be raffling off a year of free wings every hour, along with other freebies.