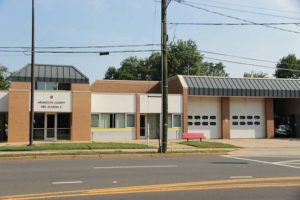 Repairs are planned for Fire Station No. 2 (4805 Wilson Blvd) in the Bluemont neighborhood, some of them stemming from last year’s earthquake. At its meeting on Saturday, July 21, the County Board will vote on awarding the work contract to the Avon Corporation.

The contract will cover stabilization of the entire building’s foundation, in addition to repairing cracks in the bunk rooms. Some of the bunk rooms in the 15-year-old building already had cracks due to shifting of loose foundation soil under the building. But the earthquake last August 23 caused damage to spread to another two rooms, and to the entrance of the truck bay. In addition to repairing the existing damage, the work is designed to prevent future wall cracking.

Some of the work includes demolishing and replacing walls, repairing cracks and slab jacking to raise and stabilize the foundation. New structural steel columns, metal panels and windows will be installed. There will also be some utility relocation and the roof drain will be moved.

County staff concluded that although the shifting and cracking of the building does not pose an immediate safety threat, the continuous movement will eventually cause the structure to collapse.

Staff recommends the County Board approves the contract, worth $247,000, on Saturday.