(Updated at 3:00 p.m.) The County Board will take up a set of issues at its meeting on Saturday, July 21, regarding the Rosslyn Gateway project — a plan for the re-development of a block just south of Rosslyn Gateway Park.

An existing 12-story office building — Rosslyn Gateway North — would remain, but is expected to eventually be replaced with a 20-story residential tower as part of a second phase of the project. Among the businesses impacted by the redevelopment is Continental Pool Lounge (1911 Fort Myer Drive), which sits on the ground floor of what would eventually become the residential/hotel tower, according to architectural documents.

As part of the redevelopment, the County Board would have to approve two ordinances for vacating certain easements and public rights-of-way owned by the county. JBG would pay compensation to the county for the vacated areas, listed at about $7.5 million. County staff recommends the Board approves the ordinances. 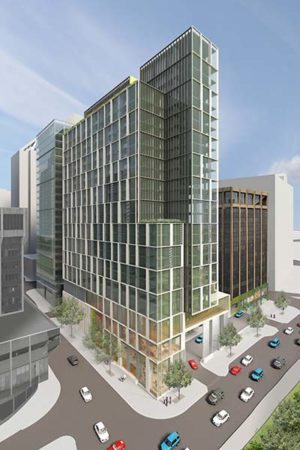 As part of the plan, the internal loop roads bordering portions of the block would be eliminated. The county staff report indicates removing these roads is consistent with ongoing plans to re-develop Rosslyn and for transforming some of the area’s traffic patterns.

The developer is also required to present a plan regarding the relocation of all utilities on the vacated land. It’s an extensive process expected to take from three to five years. The Department of Environmental Services will have to approve the plan.

Surrounding property owners have been informed of the request for the proposed vacations, and there has been some community opposition. The complaints primarily focus on the possibility that the placement of the new development would block the view of Georgetown currently available to residents of nearby buildings.