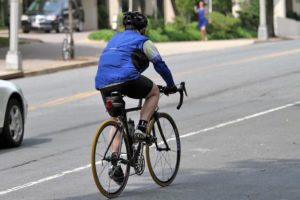 (Updated at 10:40 p.m.) There’s been a lot of back and forth over whether or not to build the proposed Columbia Pike Streetcar, ahead of the County Board’s scheduled vote on Monday, July 23. Amidst the frenzy, some bicyclists are hoping their needs and safety won’t get overlooked.

Organizations such as the Washington Area Bicyclist Association (WABA) and the Arlington Bicycle Advisory Committee (ABAC) haven’t yet taken an official position on the streetcar plan, considering it hasn’t been officially approved yet. Still, individual members of the organizations are raising red flags for potentially dangerous situations.

Shane Farthing, Executive Director of WABA, explains that the streetcar tracks pose a particular problem because bicycle wheels could become caught in them. In addition to such a scenario making it possible for a cyclist to tip over, it increases the danger of being hit by a vehicle.

“As long as you’ve got gaps that can catch a tire, it’s probably not terribly safe to mix with high speed traffic,” said Farthing. “WABA really supports as many transportation options as possible. But the streetcar is one that has a particular difficulty mixing with bikes, because the tracks themselves present a physical hazard.”

Farthing said this issue has come up numerous times in D.C. when accidents occur because of the streetcar tracks on H Street NE. He expects the problem to be similar on Columbia Pike should the streetcar be approved. In fact, he notes it could be worse considering the longer stretch of land that Columbia Pike covers, and the higher speeds at which drivers travel. Additionally, cyclists on Columbia Pike have fewer parallel lengths of road they could use to commute.

“There really aren’t any alternative routes to Columbia Pike. It’s a main corridor and a straight shot,” Farthing said. “If streetcars go on Columbia Pike it’s going to have big numbers of folks having to figure out how to negotiate that conflict.” 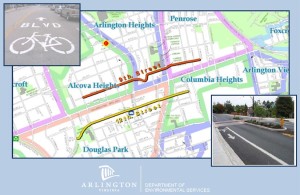 Mark Blacknell, ABAC chair, explained that his organization has worked with the county to create plans for “bicycle boulevards” — lower traffic cycling routes just north and south of Columbia Pike. While the boulevards may be a viable compromise, Blacknell admits they’re not the most ideal scenario.

“I’d love to find a way to move the tracks to the center of Columbia Pike, removing the worst of the danger to bikes,” said Blacknell. “The bicycle boulevards aren’t a perfect substitute for adequate bicycle facilities on the Pike itself.”

Besides the wheel problem, there are other safety issues related to the streetcar, such as slipping on wet tracks or cyclists not having adequate space to maneuver. Tracks are often installed on the right side of the road, where cyclists are accustomed to traveling. Adding another obstacle makes some cyclists nervous, because it will be more difficult to avoid dangers like car doors opening.

“It’s uncomfortable to ride in areas where you’re squeezed between hazards, not having the spacial freedom to make movement where it’s needed,” Farthing said. “You’re basically confined to that because once you’re in between the two rails, you can’t get out of them easily.”

Farthing said the space crunch is not only a concern for cyclists, it puts drivers at a disadvantage as well.

“It gives another level of unpredictabililty. How do I keep myself safe?” said Farthing. “And from everyone else’s perspective, where should I expect cyclists to be?”

Should the streetcar go in as planned along Columbia Pike, Farthing fears some cyclists may grow frustrated, and eventually give up.

“If you basically take a piece of roadway that’s a major regional connector for cyclists, and you make it somehow unsafe for cyclists, you’re actually going to be discouraging ridership,” said Farthing. “It’s a challenge that needs to be worked out. You don’t want to invite crashes and hazards, or decrease ridership.”

Both Blacknell and Farthing stress that they’re not against the concept of a Columbia Pike streetcar as a rule. They’d just like to see an increased effort to incorporate cyclist safety into the plans. That could mean discussions with county staff members regarding compromises, and further examination of lessons learned in other cities with streetcars.

(One such city is Toronto, where an extensive streetcar system helped to make streetcar tracks the number one cause of bicyclist injuries.)

“Just like the county was a leader in bike sharing, perhaps they can be a leader in resolving this conflict,” said Farthing.

Not all cyclists share the desire to ride on Columbia Pike, however. Chris Eatough of BikeArlington says that stretch of road has never been an ideal route, and he doesn’t recommend it to others.

“There is some redesign that is coming to the Pike – even without the streetcar – that will help a little bit,” Eatough said. “But the nature of the Pike and the lack of available street space means Columbia Pike is never going to be a premier route for cyclists. It’s one of the very few routes in the county that I would say this about.”

According to Eatough, the county will continue to work on providing alternate routes to Columbia Pike. He notes progress on the bike boulevards plan, and a new trail likely to go in near Washington Blvd. He also mentioned expansion of the Wayfinding Signs Project, which will help guide cyclists to alternate routes.