The Arlington County Board approved a 10-year, $2.4 billion Capital Improvement Program (CIP) at its meeting on Saturday (July 21). The money will go toward a variety of projects ranging from building new schools to a new aquatics center to investing in streetcar plans.

“This CIP is both a financially sustainable plan that strikes a balance between maintaining our existing infrastructure and making strategic investments that will meet the needs of our growing community, and a vision for the future,” said County Board Chair Mary Hynes. “Our sound, forward-looking financial plan will help maintain the County’s triple-Aaa bond ratings.”

One area receiving a funding boost is infrastructure, including nearly $13.2 million for repaving many of the county’s roads. While residents report being pleased overall with the county’s services, according to the 2012 Resident Satisfaction Survey, street maintenance is a category listed as needing much improvement. 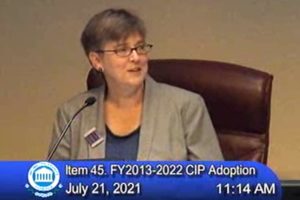 “Our streets, parks, facilities, water system and technology all need on-going maintenance and upgrades if we are to continue to provide the high-quality services that our community expects and that attract employers and visitors to Arlington,” Hynes said.

The bulk of the CIP is funded through general obligation bonds, which will be put to voters on the November 6 ballot. There will be four referenda totaling more than $153 million, in the categories of Metro and Transportation, Local Parks and Recreation, Community Infrastructure and Arlington Public Schools.

A significant portion of the allotted money in the parks referendum — $42.5 million — would go toward the construction of an aquatics facility at Long Bridge Park.

The Columbia Pike streetcar would also get funding under the CIP, pending tonight’s County Board vote on approving the streetcar plan. Because the bulk for the $250 million streetcar project would be funded through means other than bonds, it is not included in a referendum. Arlington will be responsible for 80 percent of project costs, while Fairfax County will be on the hook for the other 20 percent. Of Arlington’s $200 million tab, the county hopes to obtain $92.7 million in federal and state funding.

“The Board also believes, after years of conversation with the community, that strategic investments in our transit system and our recreational opportunities – providing a streetcar system and an aquatics and recreation facility at Long Bridge Park — will well serve generations of Arlingtonians to come,” Hynes said.

The board voted to amend the CIP to accelerate phase three of the Long Bridge Park project, which includes building a playground at the park. An amendment would reallocate $1.4 million for the playground, which was originally slated to be part of the 2016 planned bond referendum. Board member Walter Tejada was the lone dissenter, questioning why the money would be put toward a playground instead of a facility he says many people have asked him about — an indoor soccer facility.

“There’s an objection on the part of thousands of Arlingtonians, that our plans still don’t address all the aspirations that people have expressed. In particular in the case of indoor soccer,” Tejada said. “I would say that this language falls short and for those reasons I’m not going to support it.”

Hynes countered that the playground holds a far smaller price tag than an indoor soccer facility would, making it easier to fund.

“There are many aspirations in this community by many people. This is about whether we can accelerate a very small, relatively inexpensive thing to meet a need,” said Hynes. “A brand new building for indoor soccer is an $80 million expenditure. To rearrange this ten year plan to accommodate that would require us to make other priority choices.”

The board voted unanimously to approve the CIP, which covers FY 2013-2022. The move from a six-year to a 10-year plan is intended to allow for better planning and financing of multi-year projects. The CIP will be updated every two years.