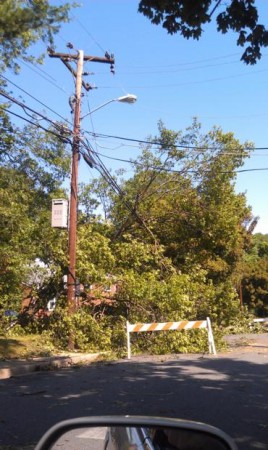 Arlington is hoping to receive some federal funds to cover the hundreds of thousands of dollars it spent during emergency response to the June 29 derecho storm.

County Manager Barbara Donnellan got the ball rolling by declaring a local emergency on June 30. Nearly 50 other Virginia localities did the same. Yesterday, Governor Bob McDonnell formally requested assistance for the state from the the Federal Emergency Management Agency, estimated at $27.5 million. Now it’s up to President Obama to either approve or deny the disaster funding.

Jack Brown, Director of the Arlington County Office of Emergency Management, explains that to be eligible for federal funds, the county must incur more than around $700,000 in expenses. So far, the bill from the June storm adds up to approximately $802,000, which includes costs for personnel, equipment and debris removal. The total could increase as more numbers are finalized.

Brown offers a reminder that there’s a lot of paperwork and a long review process involved, and that reimbursements filter in gradually once approved.

“They don’t just cut one check for the whole amount,” he said. “We went through this after the huge snowstorms of 2009 and 2010. It’s about a year long process.”

Arlington didn’t get all the funding it requested following those snowstorms, but it fared better than many surrounding jurisdictions, according to Brown. He credits all of the individual departments involved for collecting and sorting the receipts and data that had to be submitted. The county received a total of $1.6 million, covering one storm in December 2009 and two in February 2010.

Although receiving reimbursements often involves an arduous process, Brown said the end result makes up for it.

“Once we know there has been a federal declaration, then we would go through the process with FEMA and the state, and go through all those records,” said Brown. “But it’s worth it at the end of the day.”

For now, Brown said the county continues to calculate its expense requests from the derecho, while waiting for word from the President.

“Other areas of the country were hit harder than we were with different storms, so we’re all just waiting,” said Brown.