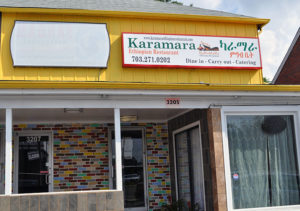 (Updated at 10:05 a.m.) The Karamara Ethiopian restaurant (3205 Columbia Pike), set for a late-August grand opening, is about 10 years in the making.

Owner Selamawit Belete emigrated from Ethiopia to the U.S. a decade ago. Establishing a restaurant, such as the one her family owned in Ethiopia, was always in the back of her mind.

She’ll have plenty of competition.

The nearby Dama Cafe has earned praise as one of the Washington area’s best Ethiopian eateries. Then there’s Harar Mesob at 542 S. 23rd Street in Crystal City and Meaza just over the Fairfax County line at 5700 Columbia Pike.

Karamara had a soft-opening last Wednesday and will be open with an abbreviated menu until Belete can get her liquor permit approved. She expects that process to take a few more weeks.