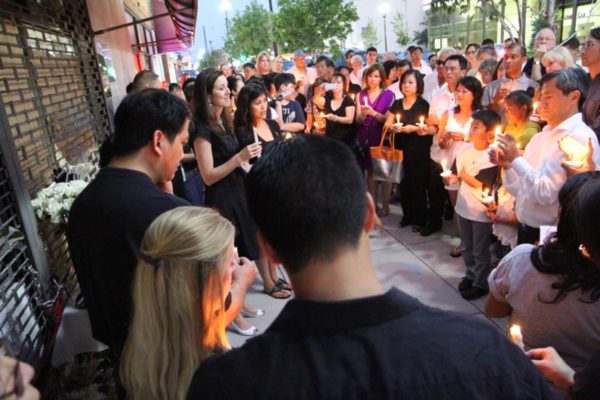 Some 200 people gathered in front of the Capital Jewelers store at 3219 Columbia Pike last night (Wednesday) for a candlelight vigil in remembrance of slain shopkeeper Tommy Wong.

The Herndon resident was killed at his store during a robbery on the afternoon of Friday, July 27. Police are currently working leads in an effort to catch the killer, who was seen on surveillance footage entering the store while wearing a yellow traffic vest.

Those who knew Mr. Wong described him as a friendly, industrious man who went the extra mile for customers and who worked hard to provide for his family.

“We are here to celebrate Tommy’s life,” said Lindsey Nguonly, owner of Princess Jewelers in Rockville, Md. Nguonly said Wong, a Hong Kong native, worked at his store for 15 years after he helped sponsor his emigration to the United States.

“Tommy came here to live the American Dream,” Nguonly said. “He never said no to anybody who asked for help. It is unfortunate and inconceivable to believe his life has been cut short like this.”

Robert Beverly, a Skyline resident and frequent customer of Capital Jewelers, said Wong had “a gentleness that we don’t see in this society very often.”

“You don’t stand alone here,” he said, addressing Mr. Wong’s family. “We feel your pain and we stand with you. We’re hoping and praying that the detectives will catch this culprit.”

Amid tears, family members thanked those in attendance and spoke briefly, but lovingly of Mr. Wong.

“My husband was a good man,” said Elizabeth Wong.

“My father has been a perfect role model,” said his 25-year-old son, Desmond. “I couldn’t have asked for more from my father.”

Vivian Wong said the turnout at the vigil — which was large enough to prompt police to block one lane of westbound Columbia Pike — was “amazing.”

“It makes it a lot easier to know we have so many people here to help us through this tough time,” she said. “I know if my father was here, he would be really touched.”

Among those in attendance was County Board member Chris Zimmerman, who lives in the nearby Douglas Park neighborhood. Zimmerman didn’t speak at the vigil, but said he came out in solidarity.

“It’s a loss to our Columbia Pike community,” he told ARLnow.com. “It’s something that shakes you. It’s terrible.”

Zimmerman’s sentiment was echoed by a customer who described Mr. Wong as a man of integrity who had a “great sense of honor.”

“We all love [Tommy] and we are going to miss him,” she told the gathered crowd. “We are not going to ever, ever forget.”

One person was seriously injured and Bob & Edith’s Diner was damaged after two separate incidents of gunfire in Arlington last night. The first shooting happened in the Green Valley…