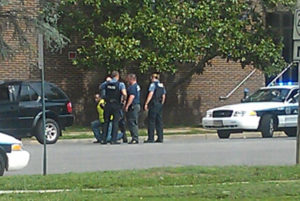 (Updated at 1:35 p.m.) Arlington County Police are working leads to figure out who killed Tommy Kin Mo Wong during a deadly robbery at Capital Jewelers on Columbia Pike on Friday.

Authorities have responded to at least four calls over the past few days regarding men spotted around Arlington who fit the description of the suspect and were wearing yellow vests. One such report prompted police to detain and question a man yesterday, as seen in the courtesy photo on the left. It happened around the same time and vicinity as an SUV running into Bangkok 54 on Columbia Pike, but the two incidents were not related. Police determined the man was not the robbery suspect from Friday, and released him at the scene.

Meanwhile, there’s been some speculation by local TV stations that the Columbia Pike robbery may be linked to a similar armed robbery in the District last month. As seen in video run on NBC 4, the gunman in the surveillance video from the June 9 jewelry store robbery in Northwest D.C. is also seen wearing a reflective yellow vest. Police say the two departments are sharing information about the robberies.

“Our detectives have been interviewing the victim in the D.C. incident as well,” said Arlington County Police spokesman Dustin Sternbeck. “We’re trying to see if there’s any possible connection between the two incidents.”

Anyone with information concerning the deadly robbery or the identity of the suspect is asked to contact Detective Richard Conigliaro at 703-228-4193 or [email protected] Information can also be reported anonymously by contacting the Arlington County Crime Solvers at 866-411-TIPS (8477).