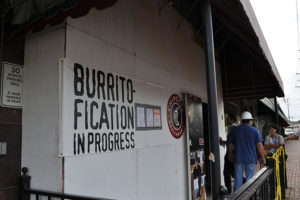 The Chipotle Mexican Grill restaurant slated for the former Cafe Parisien space at 4520 Lee Highway in the Lee Heights shopping center is scheduled to open on Oct. 16, according to a company spokesperson.

The franchise owner and a team of contractors were on site today (Monday) to tour the still-empty interior. But a sign on the boarded-up front of the store promised the “Burritofication” of the former French restaurant and long-time Lee Heights fixture, which closed suddenly last summer.

This will be Chipotle’s fifth Arlington location after one opened in June in the Pentagon City Mall food court.