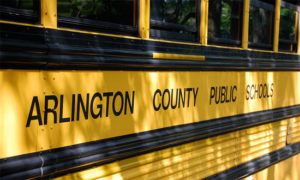 The Arlington Public Schools Transportation Director has retired, just weeks before APS will go back in session with a new, recently-announced voucher-based busing system.

Transportation Director Gregory Sutton’s last day on the job was yesterday, Aug. 7, Assistant Superintendent Linda Erdos confirmed to ARLnow.com today. Erdos would not say whether Sutton’s retirement was announced in advance or whether it was an unexpected resignation. She did say, however, that the process to replace him will not begin until later this year.

“We do not share the private reasons that employees share when they notify us of their decisions,” Erdos said. “We have an interim team of transportation managers who will lead Transportation while we begin our personnel process to fill the position later this year.”

Sept. 4 is the first day of school in Arlington, and this school year students who take the bus will be required to present a voucher in order to board an APS school bus. The move to a voucher-based system — announced in two separate letters to parents — follows the release of a report last fall that concluded Arlington’s school bus system was under “a great strain” and reaching a “breaking point” systemwide.

The report recommended a reorganization of management and administrative staffing at the school system’s Transportation Services department, among other steps.