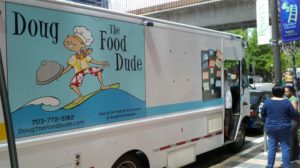 Five trucks — Doug the Food Dude, Bada Bing, Lemongrass, Hot People Food and Willie’s Po Boy — were on the docket for the so-called “Arlington Food Truck Invasion” at the Half Street Fairgrounds near Nationals Park. The free event, which also included beer, games of cornhole and a performance by the funk band Sol Roots, was held from 11:00 a.m. to 2:00 p.m.

“We invited 5 Arlington food trucks to give them a chance to vend in D.C. as well as the customers a chance to see food trucks that they don’t see every day,” said Doug “The Food Dude” Maheu, whose wife Andrea helped to organize the event.