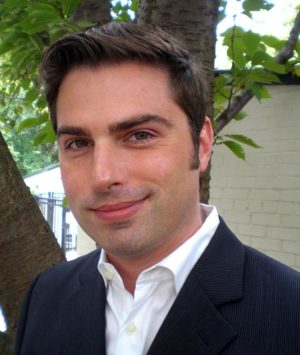 (Updated at 2:10 p.m.) Four months after the sudden departure of Artisphere Director of Programming Rosanna Ruscetti, the county-run cultural center in Rosslyn has a new programming director.

Josh Stoltzfus, 39, has been named Artisphere’s new Director of Programming. He faces the daunting task of attracting programming that will bring more people to Artisphere, which has been suffering from a lack of consistent attendance and continued financial losses that have necessitated increased taxpayer support.

Stoltzfus’ music-centric resume includes roles as the tour manager for The Holmes Brothers, production coordinator at Wolf Trap and, most recently, programming manager for the Columbia Festival of the Arts. He has a bachelor’s degree from the Berklee College of Music and a graduate degree in Arts Management from American University, according to his LinkedIn page.

On Twitter, Artisphere said it was “thrilled” to announce the hiring of Stoltzfus, whose “passion for the arts is perfect for us.” The cultural center also issued the following press release.

Artisphere has named Josh Stoltzfus as its new Director of Programming. Stoltzfus brings more than 16 years of performing arts experience working in creative, programmatic and administrative positions. Stoltzfus has extensive programming experience collaborating with performing artists and their representatives, as well as expert knowledge of American music, specializing in jazz, blues and popular music, with advanced knowledge of other major artistic disciplines including dance, theatre, comedy and the visual arts.

“We are thrilled to welcome Josh to the Artisphere team,” says José Ortiz, Executive Director of Artisphere. “His diverse experience and passion for the arts is the perfect blend for Artisphere.”

Stoltzfus joins Artisphere from the Columbia Festival of the Arts in Columbia, MD, where he spent the last five years planning strategic partnerships and working with the team on selection of artists, program content and budgeting for an annual sixteen day multidisciplinary arts festival. He previously worked with the Wolf Trap Center for the Performing Arts and spent a graduate fellowship with the Cyrus & Myrtle Katzen Arts Center and Harold & Sylvia Greenberg Theatre at American University. Stoltzfus also brings experience as an artist representative, tour manager and more than two decades’ experience as a musical performer.

“I am incredibly pleased to be a part of the Artisphere team,” said Stoltzfus. “Arlington is quickly becoming known as a hub of cultural activity. I am eager to engage Artisphere audiences with innovative and thought-provoking art in all disciplines.”

More Stories
Crime Report: ‘I See What You Did There’ EditionVoting in Progress for Next Year’s Outdoor Movie Fest in Crystal City