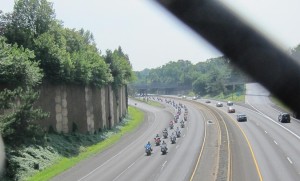 Update at 3:30 p.m. — The ride has concluded, with the motorcylcists arriving in Pentagon City. Few residual delays remain on eastbound I-66 as a result of the rolling road closures, according to traffic cameras.  One motorcyclist who fell on the ramp from Route 110 to Army Navy Drive is receiving medial attention for non-life-threatening injuries.

About a thousand motorcyclists will be coming to Arlington tonight for the annual America’s 9/11 Ride.

The bikers are scheduled to leave the Flight 93 Memorial in Shanskville, Pa. this morning en route to Arlington, where they will be staying overnight. The motorcycle ride will enter Arlington via eastbound I-66 around 3:00 this afternoon. The ride will continue to southbound Route 110, and will end up at the Doubletree Hotel at 300 Army Navy Drive in Pentagon City.

Arlington County Police will be escorting the ride through Arlington. Officers will temporarily close on-ramps to “avoid mixing vehicles with the ride,” according to police spokesman Dustin Sternbeck.

The bikers will leave for New York City from the Pentagon North Parking Lot, via northbound I-395, on Saturday morning.

END_OF_DOCUMENT_TOKEN_TO_BE_REPLACED

More Stories
Morning NotesYour Beermonger: What to Do About Cider?