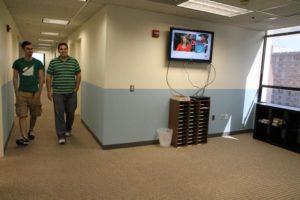 Arlington is attracting a growing number of start-up and tech companies, and the co-owner of a new coworking space in Rosslyn is placing a big bet on that trend continuing.

Raymond Rahbar, a Courthouse resident, is a founder of UberOffices, a shared office space located on one floor of a high-rise at 1400 Key Boulevard. The office opened in July and already a number of young companies now call home.

Rahbar says he was able to attract a number of companies from other parts of the D.C. area thanks to a number of factors, including: Rosslyn’s central location relative to federal offices in D.C. and Northern Virginia; an abundance of nearby transportation options; proximity to the homes of potential employees; and relatively low taxes in Virginia.

“Arlington makes the most amount of sense for start-ups,” he said, before rattling off some additional advantages of Arlington in general and Rosslyn in particular. “The educated workforce… major highways all around us… the high average salary, so that means people have a savings and can take risks.”

Unsaid in that list is the fact that rent is generally lower outside the District, a key consideration for start-ups looking to conserve cash. The rent for a desk at UberOffices starts at $300 per month, compared to $700+ per month in many D.C. coworking spaces. Private offices range from $1,000 to $3,600 per month, and are large enough to host 2 to 8 employees respectively. 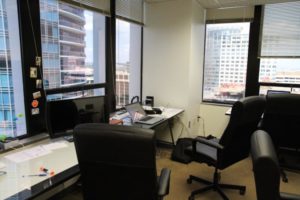 Among the companies that have set up shop at UberOffices are Votifi, which moved from Bethesda, and Lemur IMS, which moved from D.C. Votifi seeks to provide a “platform for modern political exchange,” while Lemur IMS promises to save the retail industry money and increases its profits via a “revolutionary inventory management system.”

Even though one might think of the District as more of a tech hub — it’s home to Living Social, perhaps the most high-profile local tech firm — Rahbar says Northern Virginia offers distinct advantages that large companies already are well aware of, but which the start-up community is beginning to recognize.

“Our taxes are lower, our crime is lower, our government is more stable,” he said. “They’re completely different environments. I’m sure D.C. has a couple of its own advantages, but I would bet on this area before I would bet on D.C.”

All that might explain why Northern Virginia has four times as many Fortune 500 headquarters as the District, he said.

Rahbar says he thinks the entire D.C. region is going to continue to continue to experience economic growth, even if the federal budget is cut. Among the factors contributing to that growth is the increasing amount of money flowing into politics.

“The size of government might be shrinking, but the size of politics is also increasing at the same time — campaigns and committees and all sorts of things,” he said. “So now we have more media firms, more PR firms, more lobbyists, more lawyers. Everything is just growing, even if government contracting ends up slowing down.”

Arlington and Arlington-based start-ups will continue to be a beneficiary of the strong local economy, he added.

“The whole Rosslyn to Ballston corridor is just going to continue to grow and grow,” Rahbar said. “The average person here is pretty young, the salaries are pretty high and the companies are doing really, really well.”

As for why companies should choose to locate in UberOffices as opposed to a more traditional office, Rahbar said UberOffices seeks to not only provide a place for employees to work (for less rent), but also networking opportunities for its tenants. UberOffices hosts business plan competitions, educational seminars, cocktail parties, “hackathons,” and meetings with angel investors. It also encourages its members to network and feed off each other’s creative energy.

And if that’s not enough, there are also the creature comforts typical of start-ups and tech firms. Amenities include a kitchen, a refrigerator stocked with beer, conference rooms, a lounge, flat screen TVs, video games, a Foosball table, and artwork from a local graffiti artist.