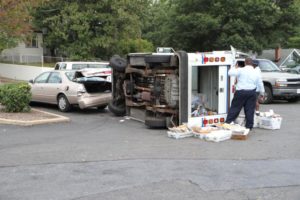 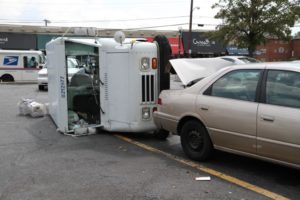 A U.S. Postal Service mail delivery truck flipped on its side in the parking lot of a 7-Eleven store this afternoon.

The accident happened just after 1:00 p.m. outside the 7-Eleven at the corner of Old Dominion Drive and N. Vernon Street, across from the Lee Heights Shops. The mail carrier who was driving the truck told police he was trying to park when his foot somehow became stuck against the accelerator, causing the truck to hop the curb and do a 360 degree turn across the southbound lanes of Old Dominion Drive, before finally striking a parked sedan and flipping on its side.

The driver’s leg was pinned between the vehicle and the pavement, but a group of witnesses managed to lift the truck just enough to free him, according to police. He was then able to climb out of the truck on his own power.

The driver suffered lacerations to his leg and arm, but did not require transport to the hospital. In fact, he remained on scene to help workers transfer mail from the truck to other postal vehicles.

The postal carrier was given a citation by police for failure to maintain his vehicle.