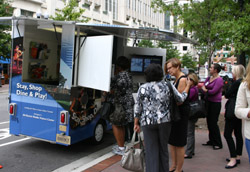 The $2.7 billion in spending represents 13.1 percent of all tourism dollars in the Commonwealth of Virginia, making Arlington the top county in the state for visitor spending.

The tourism industry is responsible for 24,000 jobs in Arlington and generates nearly $74 million, according to the county, citing data from the U.S. Travel Association. Tourism payroll and employment in Arlington both outpaced the statewide averages, up 3.2 percent and 1.9 percent respectively.

“We’re very pleased with the steady growth of the County’s tourism sector,” Arlington Convention and Visitors Service Director Emily Cassell said in a statement. “While we’re still progressing toward the peak hotel occupancy and revenue levels of 2008 and 2009, the significant growth in visitor spending is a sign of good things to come.”

Virginia lawmakers failed to renew Arlington’s 0.25 percent hotel tax surcharge in 2011. The surcharge expired after Dec. 31, 2011, and is expected to result in the loss of just over $1 million in annual revenue used for tourism promotion by the Arlington Convention and Visitors Service. Although some general county funds were allocated to make up for the shortfall, the Convention and Visitors Service budget for Fiscal Year 2013 is only $500,000, compared to $1.4 million in FY 2011.