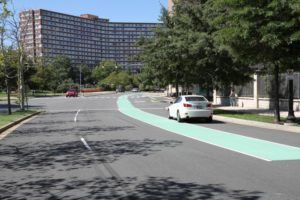 (Updated at 3:55 p.m.) Some of Arlington’s streets are getting a little greener — literally. The county recently painted certain stretches of bicycle lanes green.

So far, five areas feature the green markings including Veitch Street at Clarendon and Wilson Blvds, Military Road at Nelly Custis Drive and S. Joyce Street near Pentagon Row. Two others should be finished soon, and an additional five are expected by the end of the year.

According to Wayne Wentz, Chief of Arlington’s Transportation and Engineering Bureau, the markings draw extra attention to areas where cars may have to cross into bike lanes, particularly to make a right turn.

“The primary intent is safety improvement to help give both drivers and bicyclists more awareness of locations where their paths cross each other,” said Wentz. “In none of these locations is there an easy option to eliminate the right turn or the mixing. The green bike lane has become one of the solutions in the engineers’ toolbox to do this.”

The project has been in the works for years, and was recently approved based on nationwide research. As part of its local research several years ago, Arlington had experimented with blue paint during a test run along Military Road near Nelly Custis Drive. That marking was eventually allowed to fade until a permanent solution was approved.

“We certainly will, as with any traffic control improvement we make, monitor it and see if there’s some confusion caused to motorists and bicyclists. But the research says there shouldn’t be,” said Wentz.

Part of what makes the program effective, according to Chris Eatough of BikeArlington, is that painting only selected bike lanes draws particular attention to them. Eatough said similar plans have been successfully executed in cities throughout Europe.

“It’s not green paint all over the county, it’s where it’s most helpful,” said Eatough. “It’s a very striking visual and quite an innovative and new approach.”

Most of the green markings are expected to last five years, although touch-ups may be necessary on those experiencing particularly heavy traffic.

Wentz said the green lanes are just the latest of several upgrades underway to increase safety for bicyclists. The county is also working on signal improvements, better ramps and re-timing certain traffic lights. But most importantly, Wentz stresses, is the push for additional education for drivers and cyclists alike.

“We are trying to emphasize that both user types need to share the road.”