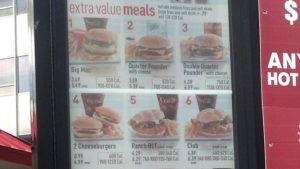 It was a precursor to a big announcement today, but we didn’t even know it.

Last week, or perhaps even earlier, the McDonald’s restaurant at 3031 Columbia Pike started using a new drive-thru menu that included calorie counts for each menu item. Although some jurisdictions require chain restaurants to post calorie counts for menu items, Arlington does not. That prompted us to ask McDonald’s why its Columbia Pike location was doing so voluntarily.

Was it a one-off experiment, or something even bigger? Today we finally got the answer. 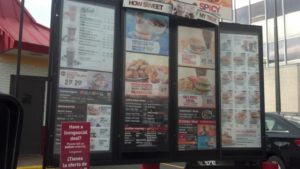 In a press release, McDonald’s announced that its restaurants nationwide — including in Arlington and the greater D.C. area — will be listing calorie information on all indoor and drive-thru menu. The move comes ahead of a new federal requirement for restaurant chains with more than 20 locations to list calorie information, part of President Obama’s health care legislation.

McDonald’s says that in addition to posting calorie information, it will be rolling out a series of healthier menu items, including new wraps, an egg white breakfast sandwich, and additional fruit and vegetable options.

See the full McDonald’s press release, after the jump.

In addition to menu board labeling, McDonald’s published its first-ever nutrition progress report [www.mcdonalds.com/changing] and revealed several 2013 menu innovations in test that will include recommended food groups from the United States Department of Agriculture’s 2010 Dietary Guidelines for Americans reflected in the messages supporting MyPlate. These are the latest in a series of actions to support McDonald’s “Commitments to Offer Improved Nutrition Choices,” announced July 2011. The comprehensive plan aims to help customers and employees make informed nutrition choices whether visiting McDonald’s or eating elsewhere.

“At McDonald’s, we recognize customers want to know more about the nutrition content of the food and beverages they order,” said McDonald’s franchisee, Isaac Green. “As a company that has provided nutrition information for more than 30 years, we are pleased to add to the ways we make nutrition information available to our customers and employees in Prince George’s, Montgomery, and Arlington counties and throughout the U.S.”

According to recent research by the International Food Information Council Foundation, about 15 percent of Americans accurately estimate the number of calories they need to maintain their weight. This past summer, McDonald’s introduced a “Favorites Under 400” menu that highlights the calorie information for some of customers’ favorite foods and beverages to help put calorie counts in better context.

Later this fall, 750,000 employees nationwide, working in U.S. McDonald’s and its franchisee restaurants will be introduced to a voluntary nutrition e-learning program. The program will help build employees’ knowledge of calories, nutrition and McDonald’s menu offerings.

“The transparency and availability of nutrition information enables consumers to make choices and can help caregivers teach and model decision-making behavior to children. These are life skills that will benefit them not only at McDonald’s but in every aspect of life,” said Judith C. Rodriguez, PhD, RD, LD/N, FADA, Chairperson and Professor, Department of Nutrition and Dietetics, Brooks College of Health.  “McDonald’s initiatives to provide Apple Slices and a fat-free milk option in the Happy Meals are aligned with the Dietary Guidelines for Americans, 2010, as is the goal to reduce sodium, added sugars and saturated fats in foods.”

To make nutritious choices more convenient and accessible, McDonald’s revealed plans today to test foods that would increase the number of wholesome choices on its menu. The menu items being explored for 2013 include more recommended food groups. Among the additions being tested: