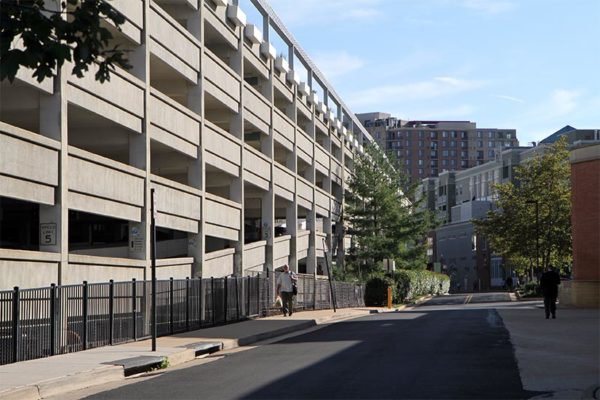 Suicide Thwarted at Metro Station — An alert Metro train operator helped to thwart a suicide attempt at the Reagan National Airport Metro station Thursday morning. Around 7:55 a.m., a man climbed down and laid on the southbound tracks. The operator of an approaching train saw the man and stopped the train in time. Transit police apprehended the man and took him to a local hospital. [Washington Examiner]

Park(ing) Day in Rosslyn — Today (Friday) is Park(ing) Day, a day where people worldwide transform parking spots into temporary public spaces. Artisphere in Rosslyn will again be participating. A giant shopping cart, created by artist J.P. Flick, will be placed near the corner of Wilson Blvd and Lynn Street. Passersby are encouraged to donate gently used professional attire by placing it in the cart. The clothes will go to a job placement program run by the Arlington Street People’s Assistance Network. [Artisphere]

Retired Educator Receives Community Award — Meg Tuccillo — who for 26 years served Arlington Public Schools as a teacher, a principal, and an assistant superintendent — has been named the 2012 recipient of the William T. Newman Jr. Spirit of Community Award. “The Board was impressed by Meg Tuccillo’s highly regarded dynamic and good-natured commitment to Arlington, both in her professional role as Assistant Superintendent of Arlington Public Schools and in her broad involvement in several nonprofit organizations serving children, families, the homeless and strengthening education and the arts,” said Julian Fore, president of the Arlington Community Foundation, which administers the award. [Sun Gazette]

Va. Flags Half Staff for State Supreme Court Justice — Virginia state flags have flown half staff this week in honor of former state Supreme Court Justice Henry H. Whiting, who died on Sept. 17. Whiting was a justice when the court first upheld the use of DNA evidence in Virginia. The DNA case in question originated in Arlington — the trial of Timothy Wilson Spencer for the 1987 rape and murder of 44-year-old Susan Tucker in her Arlington condominium.