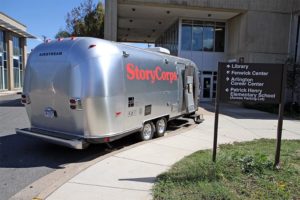 StoryCorps, a nonprofit dedicated to recording the stories of Americans from various walks of life, has brought its mobile recording booth to Arlington.

StoryCorps’ silver Airstream trailer will be stationed outside the Columbia Pike Branch Library and Arlington Career Center, at 816 S. Walter Reed Drive, through Oct. 20. The Brooklyn-based organization worked with Arlington Public Library and WAMU 88.5 to secure the location, which is accessible via several bus lines and via car (the library and career center share a sizable parking lot).

StoryCorps’ mission is “to provide Americans of all backgrounds and beliefs with the opportunity to record, share, and preserve the stories of our lives.” To date, the organization has recorded more than 40,000 “interviews” since 2003. (Participants are asked to bring a friend, family member or colleague to do the interviewing; StoryCorps staff members only handle logistics and tend to the sound equipment.)

Anybody who wants to record their story can make a reservation online or by calling 1-800-850-4406. The first reservation available as of Monday afternoon was 11:00 a.m. on Tuesday. Each recording session is 40 minutes long and each interviewee is given a broadcast-quality CD of the recording at its conclusion.

StoryCorps has two stationary recording booths, one in Atlanta and one in San Francisco, but the one in Arlington is its only active mobile booth. Interviews from the booths are archived at the American Folklife Center at the Library of Congress, and are occasionally featured on the radio.

Virginia Lora, the site supervisor for StoryCorps, said one of her favorite interviews was a man from Waco, Texas who misspelled an email address by one letter and accidentally reached a woman in the Philippines. The two started corresponding, and that correspondence blossomed into a romance that led to the two marrying. They now live together in Waco. 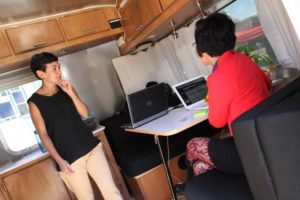 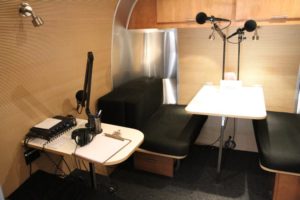