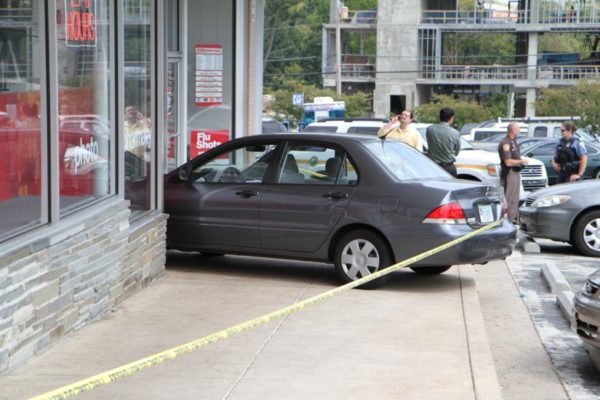 (Updated at 2:20 p.m.) A car has plowed into the CVS Pharmacy at 5017 Columbia Pike for the second time in as many years.

The incident happened around 11:00. The car, a Mitsubishi sedan, hopped a curb smashed through a low wall and several large windows next to the entrance to the store, coming to rest on the sidewalk. Nobody was injured. Initial reports suggest the driver was trying to back out of the parking spot, but instead hit the gas while the car was in drive.

The fire department ordered the store temporarily closed as a safety precaution, pending a building inspection. A manager, who was assessing the damage, said the mid-day closure was costing the store “thousands” of dollars, not to mention the cost of repairing the damage.

In May 2011, a car hopped the curb and smashed into the store just feet from where today’s accident occurred. The scars from that accident are still visible in the repaired section of wall.

The manager said the store will likely look into planters or other ways to prevent additional accidents.