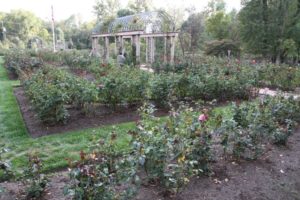 A fall rose celebration at the Bon Air Memorial Rose Garden (850 N. Lexington Street), originally scheduled for Saturday afternoon, has been canceled due to a lack of roses.

The event was to include “docent led tours, potting stations for your own rose rootings, poetry readings, cookies and lemonade” at the garden, which contains some 2,000 roses. Instead, the event was called off last week because of a midge infestation that decimated most of the rose buds before they had a chance to reveal their fall blooms.

“The reason for lack of bloom was due to an insect (i.e. midge),” Arlington County Environmental Landscape Supervisor Patrick Wegeng said in an email. “We found the midge’s work approximately three weeks ago. We sprayed last week to halt the infestation… It has been determined however that most bloom will not recover this season.”

“According to staff that have worked in the rose garden for numerous years, midge infestations have occurred before within the garden,” Wegeng added. He said the rose plants are in good shape and should have a full bloom this coming spring.

“We had a terrific season until this insect started eating the buds,” Wegeng said.

In place of the public event, the Arlington Rose Foundation — which helps support the rose garden — will instead be holding smaller gathering at a private residence in Reston.