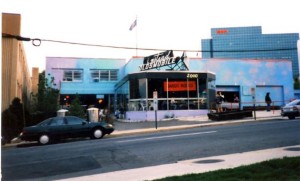 Bardo Rodeo, the Courthouse-area brewpub that eventually became Dr. Dremo’s Tap House (closed in 2008), is now being resurrected — in the District.

Last year we reported that co-owner Andrew Stewart had been raising money for a possible new Clarendon location for Dremo’s. That fell through, and almost exactly one year ago Stewart told Urban Turf that he was looking to open a “huge bar in DC with an in-house brewery.” Today, several news outlets are reporting that Stewart and his brother, Bill, will indeed be opening a Bardo Rodeo location at 1200 Bladensburg Road in Northeast D.C.

The Washington Post reports that Bardo will brew its own beer, using brewing equipment mothballed after the Arlington location ceased brewing operations.

Prince of Petworth has photos of the tire store and two adjacent buildings that Bardo will be replacing.

According to a liquor license application cited by Titan of Trinidad, the brewpub will have 98 seats inside and 251 seats at an outdoor “summer garden.”

The new Bardo is expected to open at some point early next year.

Photo by Patrick Kennerly via cizauskas/Flickr