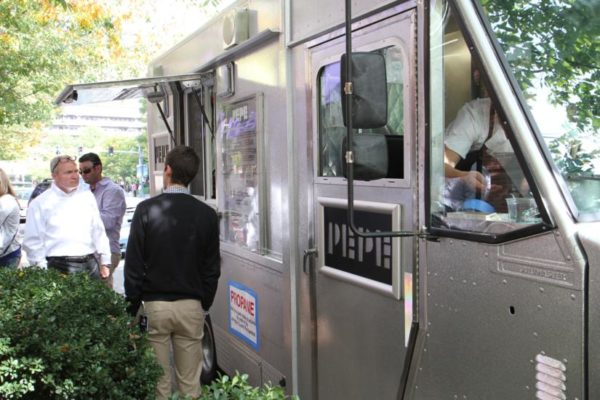 Pepe, a new-for-2012 food truck that has been making the rounds in D.C. for the past six months and Montgomery County for the past week, made its Virginia debut in Crystal City today outside Jaleo restaurant on Crystal Drive.

The truck, from Jaleo proprietor José Andrés, primarily serves flautas, a type of elongated sandwich that Andrés remembered fondly from growing up in Spain, where flautas are a popular street food.

“Chicago does hot dogs, Spain does flautas,” a member of the gathered crowd was heard saying as the truck served a steady stream of curious customers.

The level of culinary sophistication is markedly higher for Andrés’ offerings, however. Among sandwiches on the menu today were:

In addition to the sandwiches, Pepe serves fresh gazpacho, chips and two signature drinks: a non-alcoholic “gin and tonic” with homemade tonic and juniper simple syrup, and a non-alcoholic sangria.

Sean Wheaton, the chef in charge of overseeing Pepe, acknowledged that it was a bit unusual for an established restaurant group — with locations in D.C., Las Vegas and Beverly Hills — to launch a food truck. But it was done with more than just business opportunity in mind. Wheaton says the truck will be used by Andrés’ World Central Kitchen organization to provide emergency food and drink in disaster zones across the country. For instance, after this summer’s derecho, the truck provided water at cooling stations in D.C.

There is only one Pepe truck and it will be splitting its time between D.C., Montgomery County and Arlington. Plans are also in the works to expand service to Alexandria, Wheaton said.

The truck is operates year-round and is open for lunch and dinner, six days a week. Its destinations are typically announced on Twitter and Facebook.

Next week, Wheaton said, the truck is planning to serve lunch in Arlington on Monday, Tuesday and Thursday. It’s unclear where in Arlington the truck will be on Monday and Tuesday, but on Thursday it will be at Crystal City’s Food Truck Thursday. It may also come to Arlington in the evening, though those plans are not finalized.

Wheaton said the truck has been “very successful” in D.C. and he said he hopes it becomes a go-to destination in Arlington, as well, although he said it might take some experimentation and patience to figure out where and when to park the truck here.

“We’re just getting our feet wet in Arlington, figuring out where the demand is,” he said.