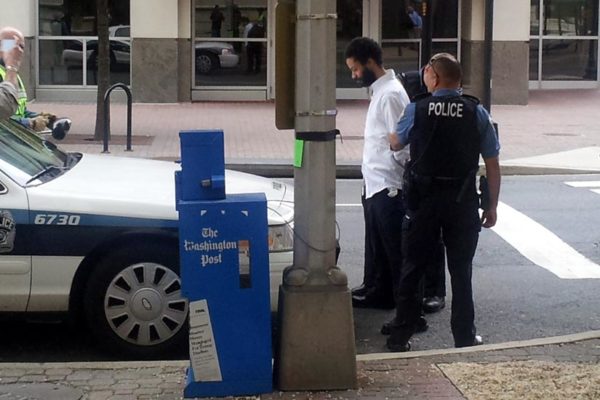 Update at 11:25 a.m. — Charges have been filed against the suspect, identified by police as 29-year-old Leon A. Traille.

Update at 5:55 p.m. — A “person of interest” was detained at Courthouse Plaza, near the Arlington County government building on the 2100 block of Clarendon Blvd, around 3:00 p.m. The county’s bomb squad was called to inspect the suspect’s belongings — a gray and red backpack containing electronics and other items — but no hazards were found.

Police were first tipped off about the suspect when someone inside the Cheesecake Factory in Clarendon saw a man, who matched the suspect description from news reports, walking down Clarendon Boulevard, according to Arlington County Police spokesman Dustin Sternbeck. The suspect is in custody and is being questioned at police headquarters.

Earlier: Arlington County (Va.) Police and federal agents are searching for a man who threw a Molotov cocktail-like incendiary device inside the Ballston Common Mall.

The man threw what was described as a “flaming bottle” from an upper level of the mall down to the food court. The device, said to be 40 ounce beer bottle, possibly containing gasoline or a similar substance, shattered on impact but did not explode, according to Arlington County Police spokesman Dustin Sternbeck. No one was injured.

Two to three additional bottles, which “smelled like gasoline,” were found in a bag by mall security after the man fled.

Employees and shoppers are being allowed to stay in the mall, but all mall and parking lot entrances are being blocked by police and no one is being allowed in. Police are currently reviewing security camera footage and police K-9 units are searching the inside and outside of the mall. The FBI’s Joint Terrorism Task Force is taking over the investigation, according to ACPD spokesman Lt. Michael Watson. The ATF, Department of Homeland Security and Pentagon Police are assisting with the investigation.

Asked whether this was an incident of terrorism, Sternbeck said it’s “too early to tell.”

Police are looking for a slender 5’11” black male, in his late 30s, with medium-length curly hair and a beard. He was seen wearing a gray jacket, a white dress shirt, a necktie and a white or gray backpack with a red inverted ‘V’ on it.

Eastbound Wilson Boulevard has been shut down outside the mall due to the emergency response. 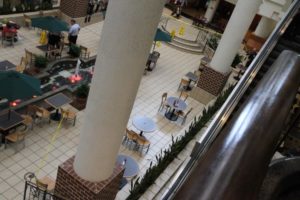 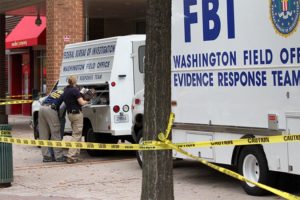 Update at 1:50 p.m. — Police have issued the following press release about the incident.

Arlington County Police are investigating an incident today involving a “molotov cocktail” at Ballston Common Mall. At 12:10 p.m., a call came into Arlington’s Emergency Communications Center, reporting that a lit bottle had been thrown into the Food Court from the top level of the mall.

The initial investigation revealed that a black male with curly hair and wearing a gray jacket stood on the top level of the mall and dropped the bottle into the Food Court. The 40-ounce bottle was filled with an unknown substance, with a fuse attached. The bottle shattered, but there was no explosion or fire. There were no reported injuries. The suspect fled the scene on foot and remains at large at this time.

Three additional bottles of similarity were found on the second level of the mall.

Arlington County Police evacuated the mall and established a perimeter when they arrived on scene. The investigation is ongoing.

Police are asking anyone with any knowledge of this incident to call the non-emergency line at 703.558.2222.