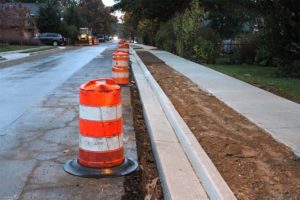 A street in the Penrose neighborhood is getting a new sidewalk, but residents have been questioning some aspects of the project.

The sidewalk is being built along the north side of a five block stretch of 8th Street S., between S. Cleveland Street and S. Courthouse Road. Before the project, only two of the blocks had sidewalks, and those sidewalks were narrower than Americans with Disabilities Act (ADA) requirements.

Now, the street is getting a five foot wide, ADA-compliant sidewalk, plus water main upgrades, curb and gutter improvements, new landscaping and a repaved roadway. But while the sidewalk was requested by the Penrose Civic Association, not everybody who lives in the area has been happy with the project.

Residents have been emailing ARLnow.com about a number of perceived problems. One of the most visible is a utility pole located in the middle of the new sidewalk at the corner of 8th Street and S. Cleveland Street (pictured, above). While it might look like a construction mistake, county officials say it’s all part of the plan, and that Dominion will be working to remove and replace the pole “as soon as possible.” 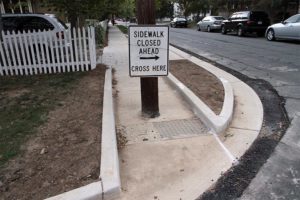 “When the County undertakes a road narrowing project such as the 8th Street South project, the curbs and utility strips are built in what is currently existing roadway,” explained Department of Environmental Services spokeswoman Shannon Whalen McDaniel. “In this case relocating the pole that is currently in the middle of the sidewalk to its new location before the curb and gutter work would have placed the pole in the existing street where it could potentially be struck by vehicles. Dominion and the County agreed that this posed more of a safety concern than temporarily obstructing the sidewalk and forcing pedestrians to use the driveway apron approximately 15′ east of the pole that has ADA compliant slopes to access the street.”

“This a temporary measure on a block that previously had no sidewalk at all forcing pedestrian, wheelchairs, strollers, etc. to use the street exclusively to traverse this entire block,” Whalen McDaniel continued. “Once the sidewalk work is complete, Dominion will erect a new poles. After all utilities are transferred to the new pole, Dominion will remove the old pole and Arlington County will repair the sidewalk. The cost of relocating the pole is borne by Dominion.” 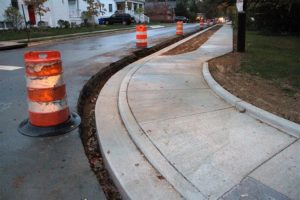 Another local worry is about the level of the new sidewalk at the corner of 8th Street and S. Wayne Street.  The sidewalk is below the current roadway, leading some residents to believe an error was made by the construction crew. That’s not the case, we’re told.

“The existing grade of the road at that location needed to be lowered in order to provide adequate drainage and that work will happen over the next couple of weeks,” said Whalen McDaniel. “When complete, the roadway will be level with the gutter pan. This is very typical of sidewalk and roadway design and construction.”

Another resident told ARLnow.com that the sidewalk was wider and the redesigned street is narrower than many residents wanted.

“People are pretty much frustrated with the county” over the public process that led to the street design, the resident said.

While it’s true that the street is being narrowed to 27 feet wide — which should allow parking on one side and just enough room for two vehicles to squeeze by — the county says the 27-foot width was chosen by residents, via a circulated petition, over a 30-foot width option.

The county says the new sidewalk and the narrowed street will “provide a safer pedestrian environment and connectivity to the Columbia Pike Branch Library, Patrick Henry Elementary School and the Arlington Career Center.”