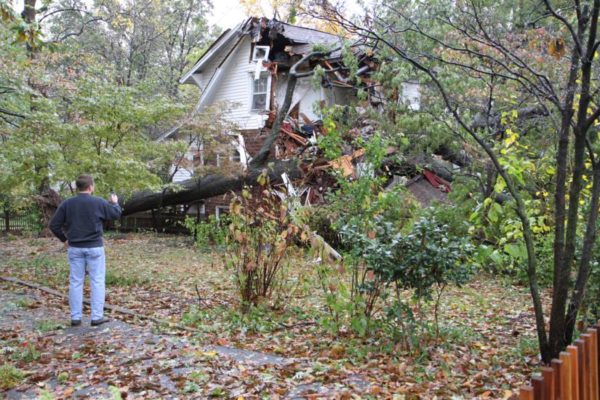 Whether it was due to a loss of power or downed trees, thousands of Arlington residents have felt the effects of Superstorm Sandy. Marco Delmar and his family are definitely among them.

Delmar might initially be dubbed unlucky because a tree fell into his home. However, upon further inspection he and his family could actually fall into the “incredibly lucky” category, considering all four are still alive to tell the story.

Around 8:00 p.m. on Monday, the family had just finished dinner and left the dining room when a huge tree slammed into their house on the 2800 block of 2nd Road N. in Lyon Park. Delmar and his wife escaped unharmed, along with their children, ages 12 and 17. (A 21 year-old daughter was away at college at the time.) 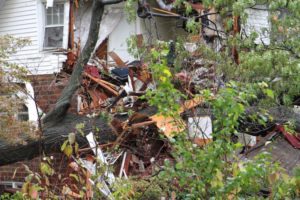 “We had just remarked, ‘I’m glad we have this really good insurance company,'” Delmar said with a chuckle. “And sure enough, we ended up about a half an hour later having to call them.”

From the inside, when the tree struck, the family heard a loud crashing sound and could see the plaster falling around them. But they didn’t realize how badly the house had been crushed until they left the house — via the basement, the only way out — and examined the damage from outside. Once they surveyed the mess, the family members felt even luckier to all walk away without a scratch.

“The house is just dirt put together, we’ll build another one,” Delmar said. “I was just thrilled that everyone was fine.”

Delmar said the house was built in the 1920s and he has lived there since 1966. He had a neighbor who worked at the Pentagon and looked up the home in historic records. The neighbor discovered that many of the trees surrounding the house were planted around the time of the Civil War, including the one that crashed into the house.

“You know, my parents owned this house so I bought it when they passed away,” Delmar said. “It was always one of their greatest fears, one of these huge trees would fall.”

Delmar, who is a record producer for Recording Arts, also has a studio in his home and has yet to examine how much of his work may have been affected by the damage. He plans to rent a small place for the family to stay while the house is rebuilt.

Although one of the most severe examples of tree damage from Sandy, Delmar’s case was not the only one in Arlington. Dozens of trees fell in neighborhoods including Bluemont, Waverly Hills, Ballston, Arlington Forest and Aurora Hills (see photos below), some bringing down power lines and utility poles. More reports continue to come in as residents assess damage in their yards and surrounding neighborhoods.

County workers are joining Dominion crews in inspecting hazards and attending to them as quickly as possible.

Photos below by ARLnow.com and various contributors. Contributed photos by photographers as noted.