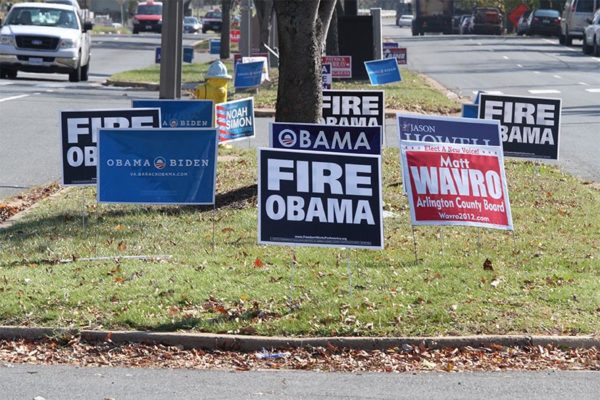 Voting Begins — Voting has begun in Arlington County and long lines are being reported at polling stations. This Election Day, Arlington voters will cast ballots for President of the United States, U.S. Senate, U.S. House of Representatives, County Board, School Board, proposed amendments to the Virginia constitution and four proposed county bond issues. The polls are open from 6:00 a.m. to 7:00 p.m. A list of polling places can be found online or by calling 703-228-3456.

Perfect Season for Yorktown Football — The Yorktown High School football team ended the 2012 regular season with a perfect 10-0 record. The Patriots will face a first-round playoff game against Jefferson on Friday night. In other high school football action, Bishop O’Connell and Washington-Lee both finished the season 5-5. Wakefield finished the season winless at 0-10. [Sun Gazette]

On Election Eve, Moran Goes on TV With Son — On the eve of the election, Rep. Jim Moran (D) appeared on Fox 5’s 10 p.m. local newscast with his son, Patrick Moran, who’s currently the subject of a criminal investigation over a video that allegedly shows him giving advice to someone planning to commit voter fraud. The elder Moran called his son an “idealistic kid” who said something “stupid.” Said Rep. Moran: “I still love him and I’m proud of him.” Patrick Moran, meanwhile, explained that didn’t fully comprehend the scheme that the undercover video producer was explaining to him. [MyFoxDC, Associated Press]

Back to Drawing Board for Reeves Farm — Arlington County’s efforts to find a partner to help restore the historic Reeves farmhouse have been fruitless. County officials say they were unable to find a suitable partner, and will now likely “go in another direction.” A group that wants to transform the farmhouse and surrounding property into a “learning center” says it will continue to try to persuade the county to work with them. [Sun Gazette]