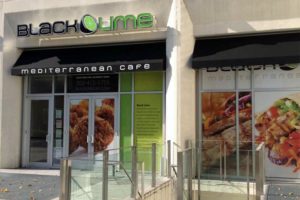 Update on 11/19/12 — The restaurant opened briefly but had to shut down due to a sprinkler problem, a PR rep said today (Monday).

“The restaurant was open for about 3 hours and then they encountered a sprinkler problem, forcing them to shut down. The fire department is still at Black Lime Café this morning fixing the issue; they hope to open again tomorrow morning,” we’re told.

It’s the first of at least a dozen planned Black Lime Café locations in the D.C./Baltimore area, the company says. Named after a Mediterranean spice, Black Lime will offer a Chipotle-like counter service menu, allowing customers to build their own pita, salad bowl or kumpir (baked potato).

This weekend, the restaurant will be celebrating its opening by donating 100 percent of restaurant proceeds to the Armed Forces Foundation, which provides financial support to the families of injured veterans, according to the press release.

Black Lime Café isn’t the only new restaurant concept coming to Crystal City. Owners Paul Stratmeyer and David Levitt are planning to open a second restaurant next door to Black Lime Café. DelMarVa’s Taphouse, as the restaurant will be called, will offer a menu of traditional southern dishes and “local crafted beer and wine.”

DelMarVa’s Taphouse is expected to open in Crystal City in the summer of 2013, according to a PR rep.