(Updated at 1:15 p.m.) Arlington County police have arrested three suspects in the murder of an 87-year-old Arlington man. 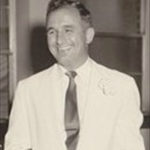 Today, the Arlington County Police Department announced that three people have been arrested in connection with Wood’s death, which is now suspected to be a homicide.

Among those arrested was Mack’s 47-year-old son. Police records show he was arrested in Hillsborough County, Florida, in the Tampa area, yesterday, Jan. 28.

The Arlington County Police Department’s Homicide/Robbery Unit has charged three suspects in connection with the suspicious death of an Arlington County resident. The investigation began when the incident was reported as an accidental death on the morning of October 13, 2012. The victim was identified as Mack L. Wood, 87, of Arlington, VA. His body was discovered inside his residence in the 3700 block of N. Wakefield Street by a family member.

After a thorough review of evidence, forensic examination, consultation with the Office of the Chief Medical Examiner and an extensive investigation, three suspects were identified and apprehended without incident. The son of the victim, Mack Leon Wood, Jr., 47, was located by the United States Marshals Service in the Tampa, FL area and has been arrested and charged with first degree murder. Jean Caleb Pierre, 32, and Sapien Edmonds, 29, both of Henrico, VA have also been charged with first degree murder. All three suspects are currently being held without bond.

Wood’s death was the fifth reported homicide in Arlington County in 2012, after homicides in Shirlington, Hall’s Hill and on Columbia Pike.