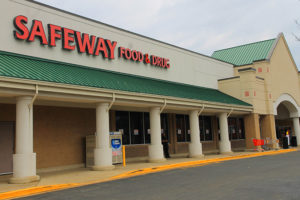 The Safeway store in Cherrydale (3713 Lee Highway) will soon undergo a revamp.

A Safeway representative attended the Cherrydale Civic Association (CCA) meeting earlier this month to discuss the remodeling plan with residents. According to information presented at the meeting, the building footprint would remain the same and the remodeling would occur within the store.

“We’ve asked them for a better deli, fresh produce, a bakery. A lot of food was too close to expiration,” said CCA President Maureen Ross. “It’s just in need of renovations.”

Ross noted that Safeway has thus far been receptive to the idea of adding a Capital Bikeshare station on the grounds.

”We’re very excited and we’re praising them,” Ross said. “We’ve also asked them to see if they’d be willing to adopt the street trees because Arlington County has not been able to maintain the trees and they look terrible.”

There’s the possibility that the final plan will involve changes to the store facade and landscaping, but that will not be determined until Safeway gives final approval and the design is revealed. Final approval is also necessary in order to name an official start date for the makeover, although the CAA hopes it can begin in March. We’re told the renovation should take around 90 days to complete.