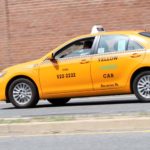 Hard-driven, high-mileage taxicabs might not seem like a very attractive target for car thieves, but in the past week three have been stolen from the same block of Columbia Pike.

Arlington County auto crimes detectives are “actively engaged in” an investigation into the thefts, said ACPD spokesman Dustin Sternbeck, who couldn’t recall any other taxi thefts in Arlington in the past year. The cabs all had D.C. tags and ranged in model year from 1998 to 2004.

From the stolen vehicle portion of this week’s crime report:

Also in this week’s crime report, a woman was grabbed from behind while walking home from the Ballston Metro station. Her purse was stolen but she was otherwise physically uninjured.

ROBBERY, 01/24/13, 4400 block of N. 4th Street. At 11:53 pm on January 23, as a female victim was walking home from the Ballston Metro station alone, she was approached from behind by a male subject who placed his hand over her face and grabbed her purse. The subject fled the scene on foot and was not located. He is described as a black male, approximately 5’7” tall and 160 lbs. He was wearing a black wool coat, dark jeans, knit hat, light colored scarf and dark gloves at the time of the incident.

ROBBERY, 01/27/13, 700 block of N. Glebe Road. At 2:43 pm on January 27, two subjects entered a store together and attempted to steal merchandise by placing items in a bag. The two subjects were confronted by loss prevention while trying to leave the store with the stolen merchandise. The female subject struck a loss prevention employee and attempted to flee by foot. Sarah Karam, 22, of Arlington, VA was arrested and charged with robbery. She is being held without bond. Fahad Algour, 27, of Falls Church, VA was arrested and charged with grand larceny and is being held on a $2,000 secure bond.

MALICIOUS WOUNDING, 01/26/13, 1200 block of S. Courthouse Road. At 8:10 pm on January 26, a suspect and victim got into a verbal altercation outside of an apartment. The argument escalated into a physical fight, and the suspect stabbed the victim. The victim was transported to George Washington Hospital for treatment of his stab wounds. The victim’s injuries were non life-threatening. Derek Warren Straughn, 57, of Arlington, VA was arrested and charged with malicious wounding. He is currently being held without bond.

BURGLARY, 01/23/13, 800 block of N. Abingdon Street. Between 12:45 and 1:15 pm on January 23, an unknown subject(s) entered a locked residence and stole various items to include electronics and cash. There is no suspect(s) description.

BURGLARY, 01/26/13, 600 block of N. Abingdon Street. Between 10 am and 11:37 pm on January 25, an unknown subject(s) broke into a residence. The subject(s) forced entry by prying open a basement door. The entire house was rummaged through and several items were stolen from the residence. There is no suspect(s) description.

BURGLARY, 01/27/13, 2200 block of S. Pollard Street. Between 9 am on January 25 and 9:02 pm on January 27, an unknown subject(s) broke into a residence. The subject(s) gained entry into the home by smashing a sliding glass door. The unknown subject(s) stole a gun belonging to the victim. Nothing else appeared to be stolen. There is no suspect(s) description.

BURGLARY, 01/28/13, 1500 block of N. Wilson Boulevard. Between 5 pm on January 18 and 10:55 am on January 28, an unknown subject(s) broke into a commercial building. The suspect(s) used a tool to force entry into a room within the building and stole eight laptops. There is no suspect(s) description.

BURGLARY, 01/28/13, 3900 block of N. 5th Street. At 11:20 am on January 28, two suspects were seen breaking into a residence by a neighbor. Both subjects were taken into custody following a foot pursuit. Stolen items, including electronics and jewelry, were found on the subjects and returned to the owners. Ladell Powell, 20, of no fixed address, and Anthony Bryant Jr., 19, of Beaumont, VA, were arrested and charged with burglary.