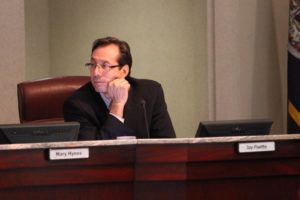 County Board member Jay Fisette will run for reelection this year.

An Arlington resident since 1983, Fisette was elected to the Board in 1997, becoming Virginia’s first openly gay elected official. He was also once an accomplished collegiate swimmer.

In a press release, Fisette’s campaign describes his goals for a hoped-for next term.

During his last term, Fisette has focused on maintaining sound fiscal policies as well as the development of Arlington’s Community Energy Plan, the successful launch of the Capital Bikeshare program, improvements to pedestrian safety, protection of affordable housing and e-government enhancements. Fisette has combined Democratic values with independent leadership.

Fisette’s objectives in his next term include balancing Arlington’s budget while also meeting long-term needs such as ensuring that Arlington public schools remain among the very best; maintaining a strong social safety net including affordable housing options; and implementing Arlington’s energy reduction strategy.