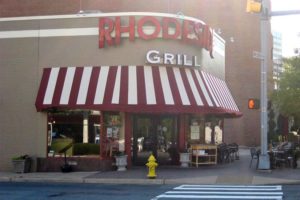 (Updated at 8:55 p.m.) Rhodeside Grill (1836 Wilson Blvd), in the Courthouse/Rosslyn area, will be closed for much of the week for “major renovations to the upstairs bar area.”

The renovations will include an extension of the bar, a new beer cooler which will accommodate a larger selection of bottled and canned craft beers, an expanded “cocktail area,” a new tap handle display, and a refinished bar top, according to Jacob Hamblin, the restaurant’s social media manager.

Rhodeside closed last night at midnight, following the Super Bowl, and is expected to reopen on Thursday.

The changes suggest that the owners of the 16-year-old restaurant believe it will be around for some time to come. Eventually, however, Rhodeside is set to be demolished as part of a planned expansion of the next-door National Science Teachers Association office building. The development was first approved by the Arlington County Board in 2005, but a construction timetable has not yet been set.

In 2011, Rhodeside co-owner Wilson Whitney told ARLnow.com that he expects that Rhodeside will re-open in the new building once it is built.

“This has been arranged but [we] do not see it happening any time soon,” Whitney said.