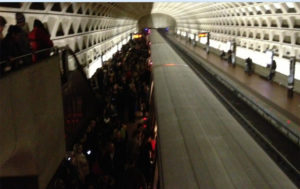 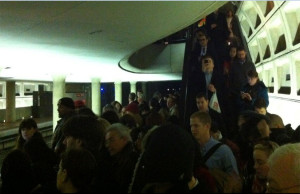 Update at 10:55 a.m. — Metro reports the Yellow Line is no longer single tracking, but there may be residual delays in both directions. The crowding issue at the Pentagon City and Pentagon stations has ended.

(Updated at 9:45 a.m.) Metro riders reported severe crowding at the Pentagon City and Pentagon stations this morning. It’s a trickle down effect of a person being struck and killed on a Yellow/Green Line track at Gallery Place in the District.

Twitter has been abuzz with customers reporting potentially dangerous crowding conditions and sending photos like those above. Passengers report train drivers saying that due to back-ups and delays from the situation, trains are skipping certain stations or turning around. Other passengers reported not being allowed to enter the crowded Pentagon City station.

Green and Yellow line trains are single tracking between Mt Vernon Sq and Archives with delays in both directions due to a person struck by train at Gallery Place.

The incident occurred at approximately 8:00 a.m. when an adult male placed himself in the path of an arriving northbound train. The incident appears to be intentional.

Customers should expect delays in both directions on Green & Yellow Line. Yellow Line customers in Virginia should consider using Blue Line as alternate.