Dozens of taxi drivers converged on Clarendon this afternoon, deliberately disrupting traffic to protest what they claim are poor working conditions in Arlington.

The cab drivers drove slowly around the Clarendon Metro station in protest of their employers and Arlington County. Organized by the cab drivers union Arlington United Taxi Operators, they’re lobbying for a public hearing before the County Board. 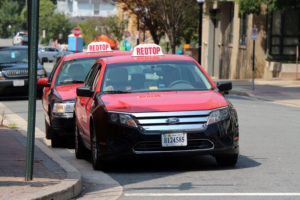 The drivers and the union want to change the ordinance that regulates taxi operating permits, which the protesting drivers feel is written in the interest of the taxi companies’ owners, not the drivers.

“The companies basically treat us like slaves,” said Abdellah Ouazzani, a cab driver who declined to state which company he drives for out of fear of losing his job. “They abuse us and they can fire us any time they want.”

In recent years, Red Top Cab and Yellow Cab Company, owned by the same parent company, have raised the dues drivers pay from $145 to $175 to $205 a week, Red Top Cab Vice President Charlie King confirmed. The most recent increase, King said, was coupled with a reduction in credit card fees drivers pay when customers charge their rides, estimated at $30 a week.

Drivers say the steeper fees cut into the pay they end up taking home at the end of the week, leaving “poverty-level earnings,” but companies argue that it’s fair given that the fees often cover the cost of the cabs themselves and the dispatch services that connects drivers with customers.

“Yellow Cab was operating at a loss at $145 a week,” King said. As for the perceived unfair treatment of its drivers, King said, “that’s clearly not the case. We don’t have a record of needlessly terminating cab drivers. We have a great deal of respect for our drivers.”

The Arlington County Board reviews the taxicab ordinance every two years, and when the board took up the issue last year, the taxi union demonstrated many of the same concerns and accused the County Board of racism.

The union wants the county to distribute permits to individual drivers, while the code states the nearly 800 permits in circulation are to be allocated to companies. Red Top Cab and Yellow Cab Co. combine to hold 455 operating permits, King said. Blue Top Cab holds about 170.

The union, along with Tenants and Workers United and Virginia New Majority, a progressive advocacy group, are planning future “disruptions” in other parts of Arlington, including in Courthouse, Pentagon City and Shirlington.

“We want to disrupt other areas so they can be made aware,” said Deshundra Jefferson, spokeswoman for Virginia New Majority, said. “Taxicabs are like sweatshops on wheels, and people don’t even know that the drivers are relying on Medicaid and food stamps.”