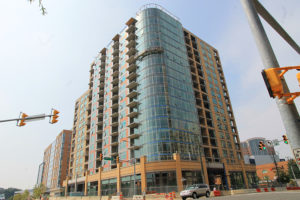 (Updated at 1:45 p.m.) Chef Mike Isabella — known for restaurants such as Graffiato and Kapnos in the District — plans to open his first restaurant in Virginia next summer.

A spinoff of the recently opened Kapnos will occupy a space at 4000 Wilson Blvd in Ballston, which is the Liberty Center South development. That’s the development where Taylor Gourmet will go in as well, as announced earlier this summer.

Kapnos Taverna will feature the same types of Northern Greek inspired fare found at Kapnos. Unlike the D.C. location, the Ballston restaurant will offer weekday lunch, weekend brunch and a happy hour menu.

“Guests have been asking me to build a restaurant in Virginia or Maryland since we opened Graffiato in 2011. Kapnos has been wildly popular in its first few months, and we think this sister concept will be a great addition to the booming neighborhoods in Arlington,” said Isabella in a press release. “Next spring, our team will travel to Greece, and we plan to build the menu around reinterpretations of regional cuisine.”

The 4,700 square foot space will have seating for 185 guests inside, and 40 on the outdoor seasonal patio.

If all goes according to plan, the restaurant is expected to open in summer of 2014.