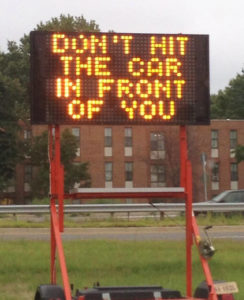 The electronic sign the Arlington County Police Department stationed at Washington Blvd and Route 50 with the seemingly obvious message “don’t hit the car in front of you” may have accomplished its intended goal. ACPD reports a reduction in accidents at the intersection.

The department targeted that particular area with an electronic message due to the high number of crashes there. It was the county’s top area for accidents during the second quarter of 2013. After the sign went up, however, the department saw a change.

“It appears the sign worked because there was a sharp decrease in accidents from July to August,” said ACPD spokesman Dustin Sternbeck.

The sign went up in early July, and from then until today (September 11), police have only responded to two accidents. That’s down from about 15 during the second quarter.

The department believes the simplicity of the sign’s message may be what caused drivers to take notice and heed the warning. Despite the large amount of attention it received, the message did not produce any complaints to police.

The electronic sign is one of four ACPD owns, all of which are mounted on trailers so they can be easily moved around the county. The signs are rotated on a regular basis; messages typically remain for about two months, unless they show a short term alert such as a special event or one-time road closure. This specific sign was changed a few days after ARLnow.com ran the story last month.