Animal control officers are on the lookout for an aggressive raccoon after two women were bitten in North Arlington earlier this week.

A raccoon bit a woman in her backyard on Monday night, in the East Falls Church neighborhood, as her four-and-a-half year old daughter watched, horrified. A raccoon also bit a woman Wednesday afternoon in the Yorktown neighborhood. The latest victim is 5 months pregnant and was walking with a baby.

In both instances, animal control officers tried but failed to locate the raccoon.

Sandra Alboum, who was bit on Monday, says the raccoon climbed onto her backyard deck, “walked right up” to her, and started biting her foot and ankle, repeatedly. She said the animal seemed “curious,” as if it were looking for food, and unafraid of humans. As raccoon was biting her, Alboum took a box that normally holds dominoes and used it to bash the animal in the head and body until it scurried away. 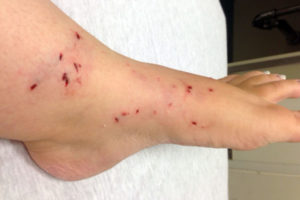 Alboum’s young daughter watched and screamed from across the deck during the attack.

“I’m just glad it wasn’t my daughter,” she said. “She was pretty freaked out, and I was too. It’s bizarre.”

Unable to drive, Alboum called 911 and was transported to the hospital, where she received nine “excruciating” rabies shots for her nearly dozen puncture wounds. She’ll have to receive at least three more shots over the next week.

According to an account posted on Facebook, a raccoon walked up to a woman who was walking with a baby and bit her. The attack happened in the afternoon, which is notable given that raccoon are normally nocturnal. The baby was not hurt.

According to the Animal Welfare League of Arlington (AWLA), the victim is 5 months pregnant. She also went to the hospital for rabies shots.

“At this point we are not certain that the raccoon is rabid,” said AWLA spokeswoman Kerry McKeel. “Our animal control officers have not been able to catch it. The only way we will be able to tell for sure if it is rabid is if it is displaying unusual behavior and if the raccoon is caught and euthanized the results of a rabies test come back positive.”

It’s unclear if the same raccoon was responsible for both attacks. McKeel said the two incidents were “unrelated.”