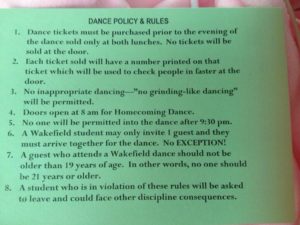 Arlington high school students will have to refrain from “grinding-like dancing” at their upcoming homecoming dances.

The grinding ban is nothing new, according to Arlington Public Schools spokesman Frank Bellavia. The policy, which appears on a list of “dance policy and rules” for Saturday’s homecoming dance at Wakefield High School, has actually been in place for 8-9 years, he said.

Bellavia said that Washington-Lee and Yorktown, which have homecoming dances this Saturday and Oct. 19 respectively, have similar policies in place.

A grinding ban made some national headlines last year after the website Gawker published an impassioned email from a student whose high school, outside of Pittsburgh, had just outlawed the sexually-suggestive form of dance. But such bans aren’t uncommon. Arlington isn’t the only school system in the area to have rules against grinding, according to this Washington Post article from 2011.

Other rules in place for the Wakefield homecoming include: