Those who live in and around Crystal City questioned the noise and safety impacts of the planned Crystal City streetcar at a public forum last night (Wednesday), but many in attendance seemed generally pleased with the county’s presentation.

County officials gave a presentation explaining the current vision for the streetcar now that the planning process is underway. The six-stop transit system will connect with the Columbia Pike streetcar in Pentagon City to the north, and will go as far south as Four Mile Run, running primarily along Crystal Drive.

One change to the design since the last community forum on the streetcar earlier this year is moving the southbound streetcar alignment directly adjacent to Jefferson Davis Highway, and off Clark and Bell Streets, as had been previously planned. The northbound and southbound tracks will both be on Crystal Drive from S. Glebe Road to 18th Street before diverging.

About two dozen residents were in attendance, most of whom asked questions of Senior Transportation Planner Matthew Huston, who gave the presentation. Huston said the impacts to environmental and cultural resources in the surrounding area were close to nonexistent, and said the noise generated is consistent with a busy urban, commercial area like Crystal City. Some attendees seemed unconvinced, however. 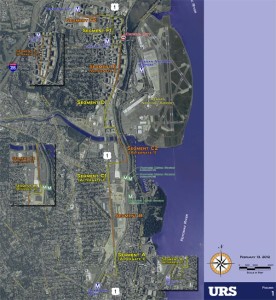 “My understanding of the Crystal City Sector Plan is a better balance between residence and commercial,” said one woman in the audience. “You’re putting a streetcar in an area that’s largely residential. I think you need to consider treating the residents not as office buildings.”

Many of Huston’s answers were simple acknowledgments that residents’ concerns would be addressed in the ongoing environmental study, which will continue until next spring.

“We consider residential buildings sensitive users,” Huston said. “We specifically look at the impact to sensitive users in the environmental study.”

Other residents questioned the alignment — one wondered why it the streetcar tracks don’t run further along Jefferson Davis Highway, which he said would make it more accessible to the residents of Aurora Highlands to the west and would reduce what he sees as a potential safety hazard at the intersection of Crystal Drive in 12th Street.

Still, opposition to the streetcar was relatively subdued, especially compared to some of the heated public dialogue over the Columbia Pike streetcars system.

“I’m pleased that they’re looking at all the right issues and asking the right questions,” said Crystal City resident Gerry Fuller after the forum. “There’s a lot of things they can’t do much about, like the width of the street… I’m in favor of any proposal to get people out of their cars. I think it’s the direction they have to go.”

Huston said “the assumption” is the Crystal City streetcar will connect with the Columbia Pike streetcar once both systems are complete, and that travelers will be able to ride from the Skyline section of Fairfax County to Four Mile Run with no transfer. Huston said the streetcar would be funded with a mix of state and local funds.